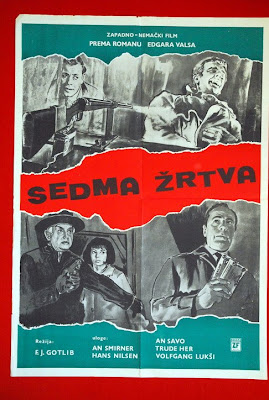 A series of murders at a race track. A dead man who appears to come back alive to seek revenge years after his execution. Thanks to Franz Josef Gottlieb’s superior direction, The Racetrack Murders is the best of all Bryan Edgar Wallace adaptations, a true gem of a Krimi that is well worth checking out and easily stands its own ground even outside the true canon of Rialto Wallaces.

Gottlieb loves long sweeping camera movements and bizarre angles. We see a fight scene filmed through the legs of the fighters; reflections captured in pools of rain; life footage captures the exciting atmosphere at a race course including the bookmakers’ bizarre secret hand communication.

The action never stops. One killing leads to another: a horse throws off its rider when a snake is thrown in its path, a trumpet player gets shot in the middle of a solo, people get killed by pitchfork, harpoon or hangman’s noose. The hookers in the local pub, The Silver Whip, wear the most amazing pieces of highly revealing strap tops.

It is also one of the best cast films of the series: Hansjörg Felmy wears goofy metal-rimmed glasses and paints cartoons. Trude Herr is his fat dietician. Ann Savo is drop dead gorgeous – though quite clearly not a Chinese as she is meant to be – and allows her breasts to be groped by Harry Riebauer. Peter Vogel as a butler for a change is not really comic relief, although he is allowed to make a few quips. Wolfgang Lukschy is a wonderfully ruthless loan shark who puts pressure on Helmut Lohner. Also starring Ann Smyrner, Hans Nielsen and Walter Rilla. Oh, and also look out for Werner Peters in a blink or you’ll miss it silent walk on cameo!

Although this is Krimi entertainment at its best, The Racetrack Murders flopped at the box office so it took CCC a few years before they decided to go back on Bryan Edgar Wallace territory.

The next few films marketed as such really had absolutely nothing to do with Bryan Edgar Wallace’s oeuvre and in some cases bore more resemblance to Fredric Brown adaptations. The Bird with the Crystal Plumage (1970), The Cat o' Nine Tails (1971) and Four Flies on Grey Velvet (1971) were Dario Argento’s first three films. The Etruscan Kills Again (1972) was directed by Armando Crispino. Although co-produced with German money these movies belong quite clearly more to the Giallo genre and as such will be not be up for discussion here.