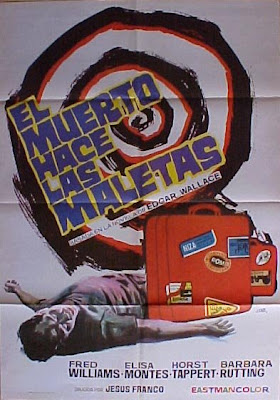 Directed by Eurotrash hack Jess Franco, The Corpse Packs His Bags was a coloured remake of the very first black & white Bryan Edgar Wallace movie, The Secret of the Black Trunk. Franco’s film very closely follows the plot of its predecessor and Franco even goes so far as to copy entire scenes from that one. Whenever he strays, however, he pushes the irreverences to the n-th degree.

Siegfried Schürenberg (Rialto’s Sir John) is delightfully cast against character as the unscrupulous leader of the drug ring with a laboratory that appears to have been left over from a previous Frankenstein shooting. One beautiful shot has Inspector Robert Redford [sic!] (Fred Williams) and Horst Tappert stand in front of two oval mirrors that reflect their images ad infinitum. A couple of shots from staircases invoke German expressionism or a camera man with a few drinks too many.

These occasional glimpses of talent, however, are only very few and far between and for the most part Corpse is one of the most amateurish and blandest Krimis ever to see the light of day: The film was quite obviously not shot anywhere near London. Instead Soho appears to be just minutes away from the Spanish countryside. It is littered with Franco’s trademark blurry close-ups and rather dodgy day-for-night shots; Luis Morris as Andy Pickwick, a crime scene photographer, is an annoying Chris Howland copy who himself was really a second rate Eddi Arent in the original movie, though he at least carries a few nudie pictures with him of women that are better looking than the ugly wenches that are cast as hookers for this film. Franco himself plays a knife expert.

It is just so annoying: Nothing wrong with a film that fails on some levels, but the director should at least have tried. Franco, however, leaves the impression that he just couldn’t give a toss.

Filmed in April 1971, it took until November 1972 for the film to find a cinematic release. Not surprisingly it proved to be a financial flop and was effectively the last of the classic Krimis to grace the screens.

As tempting as it would be to blame Franco personally for the demise of the Krimi genre, the German public was simply Krimi-d out at the time. From the following year on they would also be able to watch the Rialto series on TV and get their fix on the small screen.

Still, the genre would have deserved a better swan song than Corpse.