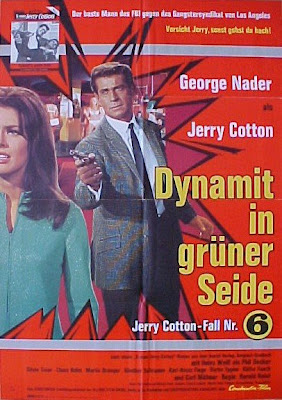 Despite the fact that the previous 5 Cotton movies had been filmed by four different directors, it is ironic that the series started falling apart just when Harald Reinl came on board to direct the last three movies. Having Germany’s best known action director of the time in charge for a continuous string of movies should have been an opportunity to streamline the success formula and raise the movie series to new heights.

Instead pretty much everything that had made the films so popular was discarded for Cases 6 and 7:

Richard Münch had enough of playing Mr High and went back to stage acting in Vienna. Rather than to replace him with another actor, the following movies had various non-descript actors playing Cotton’s superiors and often make clumsy attempts at having High involved despite his absence. We regularly see other actors relay High’s messages to Cotton and Decker or see Cotton talk to him on the phone off screen.

Both Death and Diamonds as well as Death in the Red Jaguar also see Cotton leave his familiar New York territory and go to California. In actual fact if watched close together it becomes painfully obvious that the two films had to rely on a very limited amount of Californian stock footage. We often see very similar looking shots of roads and airports. The semi-documentary approach was abandoned altogether for these last movies and no narrator was employed to provide commentary to the action. Even Cotton’s famous red Jaguar is rarely ever seen!

And even though the Cotton series of movies was never exactly renowned for their sophisticated plot devices, with the first two Reinl movies plot holes reached mythic proportions. In Death and Diamonds Cotton becomes the world’s worst undercover agent: Rather than draw attention away from himself when he infiltrates a gang, he behaves like an elephant in a china store and rarely misses an opportunity to start a fight, ask stupid questions or otherwise raise suspicion. Never mind his attempts at playing an Englishman. His ineptness in this department is only outmatched by the gang of killers in Death in the Red Jaguar who - even though they are very clearly on the list of suspects – can’t help but to continue killing their victims in the most obvious way and drive attention to themselves. At one stage we even see Cotton about to be crushed by an oncoming train. He is tied and bound at a railway junction and this despite the fact that the gangsters are trying to make this look like an accident!

If all this sounds as if Cases 6 and 7 are a miss, well, they’re not. These movies still are very fast paced and entertaining, but lack a certain je-ne-sais-quoi. Despite both of them having some very memorable stand out scenes, they often come across as more conventional paint-by-numbers actioneers than their predecessors. One fight scene follows the next, but is often missing a critical over-the-top ingredient. Or at least an over the top location: Cotton seems to have also lost his love for high wire stunts.

Mind you: When these films do manage to shine, they do so with an ingenious punch that sets them clearly apart from similar productions of the area.

Following the theft of a large quantity of poisoned gas in preparation of an upcoming diamond heist, Cotton is required to go underground and expose the gang leader, a mysterious shadow figure called Stone, behind the robbery. In his guise he is not allowed to smoke, drink whisky or eat fish. He has to take a crash course in electronics in order to pose convincingly as the safecracker, is allowed to chase blondes (though we still don’t see him in any kind of romantic shenanigans) and….. play with little toy cars! Apparently the real alarm system specialist (Claus Tinney) he is impersonating is a dedicated fan of the truly manly game of model car racing and if you didn’t know it, this film will teach you that Mini Racing Centres in the 1960s were really cool places to mingle with fellow aficionados! The red toy Jaguar we see Cotton playing with is a sad reminder of the real McCoy, however, that in this film does not get an opportunity to crash.

We also learn that bars frequented by gangsters inevitably have a bunch of Go-Go Girls dancing around pool tables. A very ingenious shot has one of the pool player’s looks turn back and forward between two very tantalisingly placed pool balls and the jiggling brimming bra of one of the dancers. The gang’s HQ hangout is called “Green Silk” and explains the German and the alternative English title of the movie. Somewhat.

Following the diamond heist, Cotton gets trapped in an incinerator out of which he miraculously manages to escape, prior to running off with the diamonds himself which he then uses as a ruse to identify the master mind behind the theft.

Up til that point Death and Diamonds was a fast paced, somewhat routine, slightly uninspired actioneer. The last half hour or so, however, raises the bar by a gear or three. The moment the real Trevor is released from prison, he starts tracking his impostor’s moves and connects with a common acquaintance: an equally common damsel in a delightfully see-through négligé who writes down a contact number on a packet of Lucky Strike.

Mabel (Marlies Dräger), a mysterious brunette in green, helps to kidnap Cotton and blonde gangster moll Lana (Sylvie 3-2-1 Countdown for Manhattan Solar). Cotton had previously prevented Lana from being raped, but she is now being bullwhipped by Mabel in order to have Cotton confess. This is a violently fetishistic scene of a kind that would have previously been unimaginable for a Cotton movie, but was soon becoming symptomatic for the Reinl directed films and taken to an extreme with the last production, Fatal Gunshots on Broadway.

When Cotton manages to escape from the gang he stops an approaching car by karate jumping feet first (!) through the windscreen and knocking out the driver. In a subsequent manic chase sequence he makes quite a great figure on a motor bike.