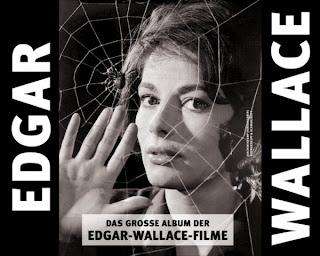 Shortly before Christmas German publishers Schwarzkopf & Schwarzkopf finally brought out Das große Album der Edgar-Wallace-Filme, a book that was 5 years in the making. Joachim Kramp, the original author, sadly never saw his project come to fruition as he had passed away a year previously. Kramp is known as one of the major Krimi- and Wallace aficionados and had previously written a number of other Wallace related tomes.

Though there have been other German books about the Wallace series Das große Album is especially of interest to an International clientele as it is primarily a lavish coffee table tome with little text. Other than some short introductory texts and forewords/interviews from Matthias Wendlandt, Peter Thomas, Joachim Fuchsberger, Karin Dor and Karin Baal the bulk of the hernia inducing hard cover is dedicated to the publication of 2000 Wallace related PR photos, lobby cards and behind-the-scenes shots. A good number of those have previously never been published before. A good chunk, however, already has. The 5-year wait has unfortunately diminished the rarity of some of the material. Especially the German lobby cards which make up a good portion of the book have in the meantime already been reproduced elsewhere. Instead of some of those I would therefore have loved to see a stronger focus on International promotional material, an area that to this moment remains largely unexplored. Still, this is a lavishly illustrated labour of love and something I am proud to have on my book shelf.

Prior to the regular edition that is going to be out later this year, Schwarzkopf & Schwarzkopf have released four sets of 500 limited copies each with autographs by Karin Dor, Peter Thomas, Karin Baal or Uschi Glas respectively at no additional costs. My own is signed by Miss Krimi, Karin Dor, herself.... and so is pretty much everyone else's who has ordered a copy so it appears that the Dor version is likely to sell out very quickly.

Well, what can I say? It ain't cheap.

The book goes for EUR 99.95 and can be ordered from the publisher or from Amazon.de. Postage within Germany, Austria and Switzerland is free, within the rest of the EU consecutively higher and as a rule and due to prohibitive postal charges the book is not being sold outside that area.

Unless you ask nicely.

It appears that the publishers may ship to the US once it is requested by direct email request. Be, however, prepared to pay a shipping fee of around EUR 65.

Wanna get a good idea what the final product looks like? Head over here for a glance at some of the pages.
Posted by Holger Haase at 8:30 PM 3 comments: