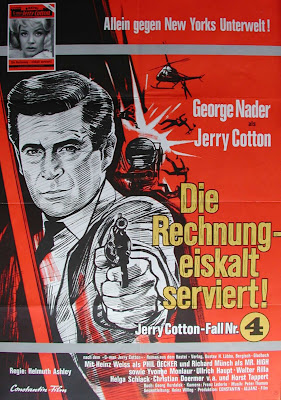 A version of this review was first published on my Hammer Glamour pages.

In Tip Not Included Yvonne Monlaur plays Violet, a nightclub singer in a Playboy Bunny-esque lounge, and gets to sing two of Peter Thomas’ catchy tunes. (“I want to be near to you/I want to be kissing you/If I close my eyes/I’m in paradise.”) Truth be told it may not necessarily be Monlaur herself who sings – I strongly suspect that she was dubbed – but she nevertheless strikes quite a stylish pose in this black and white thriller. Her character is involved with an unemployed chemist (Christian Doermer) whose expertise is needed to develop bombs for an ingenious heist by the Charles Gang. His attempt to double-cross his gang by selling the info out to a mysterious stranger (Rainer Brandt) leads to his early death.

Cotton first encounters Violet and her boyfriend when he visits the bar in which she performs in order to enjoy a relaxing after work whiskey. Needless to say, he is not able to finish his drink: A little bit less than a sip later he is already madly involved in an elevator brawl with a couple of thugs who are after Violet’s sweetheart.

From then on the film takes off with the usual breathtaking speed that can be expected from a movie of the series. The film’s heist of an armed treasury van involves a clever magnetic bomb device that gets attached to the van from underneath a bridge and blows the car to pieces. Cotton nobly accepts responsibility for sending the multi million dollar transport off to prevent the suicide of the guilt ridden director of the treasury department (Walter Rilla)… just to see him succumb to a heart attack only seconds later! That temporarily costs Cotton his licence, though it’s still him who Violet prefers to call when she gets kidnapped. When Cotton takes the call in his swell apartment he is seen wearing a suave bathrobe with JC monogram. He straight away jumps into his Jaguar to save the damsel. He can save Violet in a big shoot out, nearly gets arrested – suspended FBI agents shouldn’t carry guns! –, then follows a lead into a wrestling arena. One double cross follows the other. There just ain’t no loyalty amongst thieves any more. And just when the pace threatens to slow down we see gangster moll Mary (Birke Bruck) taking a very revealing shower. She wears nothing but her glasses which manage to stay steam free. Wow, that was a first for a Cotton Krimi! Cotton generally has little time for romantic hanky panky so fast forward to a scene where he nonchalantly jumps off a sky scraper (!) to hang on to an escaping helicopter. The subsequent flight action is marred by the dodgy rear projection, yet picks up when the helicopter approaches a lake and we see the stunt man hanging on for his life when his feet are gliding through the water.

For Monlaur this proved to be her final motion picture. She subsequently only had one more appearance in Der Tod läuft hinterher, an incredibly popular German TV Krimi serial in three parts that also starred a bunch of familiar faces from the Edgar Wallace movies such as Joachim Fuchsberger, Pinkas Braun and Elisabeth Flickenschildt.

Horst Tappert secured the part as the head of the treasury robbing Charles Gang after playing a similar part as the “Major” earlier on that year in Die Gentlemen bitten zur Kasse, a 3-part German TV mini-series based on the Great Train Robbery in 1963.

Rainer Brandt makes for a very convincing menacingly mysterious figure looming in the shadows. Though he is an excellent actor in his own right, he is primarily known for his dubbing work as he owns the most famous dubbing studio in Germany. He already had his first encounter with Jerry Cotton in the previous film 3-2-1 Countdown for Manhattan for which he dubbed Allen Pinson’s character Harry. Ironically for someone who is widely known for his dubbing work, his part in Tip Not Included required him for the largest part to loom silently in background.

Overall Tip Not Included is a very typical and entertaining example of the Jerry Cotton series at its best. This would be the last black and white production. The remaining movies were all shot in colour, though the subsequent one (Der Mörderclub von Brooklyn/Body in Central Park) still started with a black and white pre-credit scene that consisted of material shot but not used for Tip Not Included in which Cotton and Decker discover a bunch of gangsters hidden in Cotton’s apartment that is accessed with a private lift and contains a private mini race track with toy Jaguar.