The Thousand and One Lives of Doctor Mabuse (2020)

Been meaning to post a link to The Thousand and One Lives of Doctor Mabuse for ages.

The Thousand and One Lives of Doctor Mabuse is not exactly a standalone film but anyone with a passing knowledge of previous Mabuse movies or the novels by Norbert Jacques should have no problem getting into it. I have yet to see his first two entries but what I like about this production is that it manages to create a unique world within the Mabuse myth that may of course contain some references to previous incarnations but otherwise goes its very own way.

Just goes to show that low budget should never stop you from fulfilling your visions.

Also impressive to see that within that trilogy Ansel incorporated elements of Etiopomar, the fictitious country Mabuse was planning to set up and rule in the original novels, an element of the plot that was never much highlighted in earlier adaptations.

Posted by Holger Haase at 8:42 PM No comments: 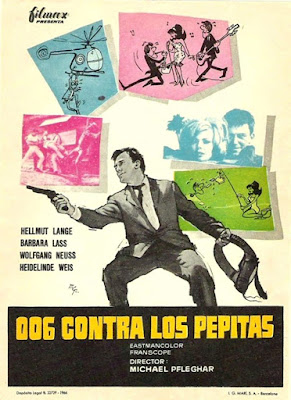 Say what you want about streaming services but every once in a while you can come across some truly obscure nuggets.

Case in point German/Italian co-production Serenade für zwei Spione/Serenade for Two Spies (1965) - with Helmut Lange in the lead role - that I found featured on Prime (here in Ireland but probably also available elsewhere).

Directed by Michael Pfleghar - who would later on revolutionise (and sex up!) German TV comedy with his truly anarchic series Klimbim featuring Ingrid Steeger amongst an ensemble cast -, this is an entertaining but uneven mix that never quite seems to know if it wants to be a James Bond clone or a genuine parody of the genre. In the end the heavy handed but often deeply absurd comedic elements win over which is a pity as the stunning location photography in San Francisco, Las Vegas and the surrounding desert would have made an excellent choice for a more serious Eurospy contender.

When the prototype for a new revolutionary laser gun goes missing, the FBI sends Agent Cormoran (Mimmo Palmara) out to retrieve it, however, it soon appears that he may have defected himself. The Secret Service (it is never quite clear to me whether it’s supposed to be the British or the German one) sends out Agent John Krim (Krim, Krimi, geddit?) to retrieve the prototype and eliminate the Cormoran if necessary.

As he doesn’t like the idea of flying, he just water skis over the Atlantic and starts a madcap search for rifle and FBI agent. (Later on in the film by the way he seems to have forgotten about that when he lands a small plane on a strip in the middle of Las Vegas, a scene for which the production team never bothered to get an official permit. Instead they had just paid off some local cops on the beat to monitor the scene for safety and else keep shtumm about it.)

The film is chockablock with so many James Bond references that it’s a wonder EON or the Fleming Estate didn’t sue.

In the German version Lange’s character is even given the code name 006 and is described as the department’s second best agent next to Bond who is currently on another mission. (In the English version it is 006 1/2).

We even have the briefest of Goldfinger musical cues at some stage.

Hellmut Lange always made a good rugged looking hero in numerous TV adventure series. His interpretation as James Fenimore Cooper’s “Leatherstocking” was one of my childhood favourites. He also hosted a popular cinema related quiz show on television and as a dubbing actor had a distinguished voice that could be heard in many international productions. He also was one of the leads in Rialto’s Der Fälscher von London/The Forger of London (1961).

As a comedic actor, however, he was severely miscast and oddly stiff looking. Exploding toilets, flirtatious ladies and off-the-cuff one-liners just weren’t his forte.

Worst of all, when he was required to smoke a “marihuana cigarette” with one of his leading ladies it became total cringe. That scene is obviously meant to be taken lightheartedly but just ends up looking embarrassing. It’s the kind of train wreck you experience when you watch your bourgeois parents try to be hip and fail miserably.

Let’s just say: This never happened to the other fella.

Maybe the main reason why anyone nowadays may still be interested in Serenade for Two Spies is Tony Kendall as the Éminence Grise and the main villain of this production.

Alas, his appearances are mainly limited to the last third of the movie and even then he is for the most part filmed just quickly passing by in a car or from odd angles that obscure his looks.

This was his first appearance in a Eurospy production and with his next movie Kiss Kiss, Kill Kill (1966) he would attain the status of Eurotrash Legend when playing Kommissar X for the very first time.

His co-star Brad Harris can also be spotted in scenes from Die Goldsucher von Arkansas/Conquerors of Arkansas aka Massacre at Marble City (1964) projected on the screen of a Drive-In in one of the many self referential sequences of Serenade for Two Spies.

The film also features popular cabaret artist and satirist Wolfgang Neuss as the Chief of the Secret Service. Neuss had been notorious when he revealed the identity of the killer in the popular German TV Krimi series “Das Halstuch” (1962) - based on Francis Durbridge’s The Scarf - the day before the last episode was due to air.

One of the main stars of that show?

Hellmut Lange! (Oh, to be a little fly on the wall when the two of them met for their one scene together.)

Also look out for Austrian actress Heidelinde Weis and Barbara Lass (Werewolf in a Girl's Dormitory).

Oh, and in case you’re wondering which actor plays which character, fear not. At each first appearance in the flick (regardless of how far into the film we are) the actor’s name flashes up on the screen.

In short: A stunning looking obscure little Eurospy entry that unfortunately wastes a lot of its potential by a heavy handed approach towards its madcap parodic approach.

Posted by Holger Haase at 8:07 PM No comments: