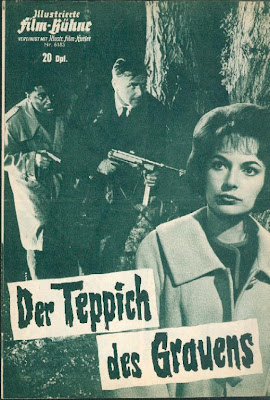 German mystery author Louis Weinert-Wilton is a peculiar case. There are very few people (even in Germany) who have ever heard of him, even less who have read him. And I challenge you to come up with just one single person who would name him a favourite author.

Yet his books appear to have been successful enough to remain in print in Germany until the 1980s and spawn a series of four adaptations in the wake of Rialto's popular Edgar Wallace series.

He was born Alois Weinert on May 11, 1875 in Weseritz (Bezdružice), a small village in Bohemia, today part of the Czech Republic. Weinert was a Sudenten German, i.e. a member of the large group of ethnic Germans in that part of Europe and visited the military school in Pola, then part of the Austro-Hungarian Empire (today belonging to Croatia).

From 1901 he was first editor, later editor-in-chief with the “Prager Tageblatt”. During his time with the newspaper he also started writing a couple of primarily humorous plays for the stage. From 1921 on he managed the “Neues Deutsches Theater” in Prague.

Starting from 1929 on and under the slightly anglicized name of Louis Weinert-Wilton he published eleven mystery novels that were clearly inspired in style and substance by Edgar Wallace who was then one of the most popular authors in Germany. In actual fact Weinert-Wilton's novels were published by Goldmann, the very same publishing house that had made Wallace's novels so immensely popular throughout Germany and were only too anxious to also give a home grown author a chance. Especially if that author also had his plots play out in a smoggy London full of mysterious villains and courageous Scotland Yard officers.

Some of his books at the time were translated into Dutch, Portuguese and Italian, though none appear to have been published in English.

Drafted in to the war Louis Weinert-Wilton unfortunately died on September 05, 1945 in a Czech POW camp in Prague, at a time when Germany had already surrendered to the Allies and the war was effectively over. As such he would not see the continuing success of his books that resulted in four movie adaptations in the early 1960s.

These four movies - Der Teppich des Grauens/The Carpet of Horror (1962), Die weisse Spinne/The White Spider (1963), Das Geheimnis der schwarzen Witwe/The Secret of the Black Widow (1963), Das Geheimnis der chinesischen Nelke/Secret of the Chinese Carnation (1964) - can only very loosely be described as a series as they all were produced by different German companies in co-production with yet another bunch of different International production houses which probably explains at least part of the reasons why these films never received any proper DVD releases anywhere. The rights issues may very well appear to be a bit of a legal nightmare.

Der Teppich des Grauens/The Carpet of Horror was adapted from Louis Weinert-Wilton's second last book, written in 1938. And without a doubt carries what must be one of the most ludicrous titles in the entire cinema history especially given that the carpet scenes aren't actually all that horrific. The couple of instances that we see a carpet is when vials of poison are thrown on them causing near instantaneous deaths of the intended victims.

Germania-Film GmbH co-produced this Edgar Wallace clone with the Italian Domiziana Internazionale Cinematografica and Spanish Época Films S.A. As a result of this the film was not shot in Germany (as the usual case with the majority of Wallace productions) but in Spain though the film still easily retained the familiar faux English flair of the Krimis.

Helmed by Krimi and action veteran Dr. Harald Reinl it also featured a number of familiar faces from the Rialto series, namely Joachim Fuchsberger and Reinl's then-wife Karin Dor in the leads and Werner Peters and Carl Lange in important supporting roles. (The English language version of this movie that is occasionally available has some of the names misspelt as Harold Reinl, Joachim Berger, Karen Dor or Werner Peter).

Most of the other actors in this production are Spanish. Watch out for Fernando Sancho, a familiar face from a number of Jess Franco movies and Spaghetti Westerns who also appeared in Amando de Ossorio's Return of the Blind Dead.

The most surprising fact with the cast is that Fuchsberger's sidekick Bob is played by a black actor (Pierre Bresari). I initially cringed when I noticed this as I suspected he'd be used as a replacement for Eddi Arent or even Chris Howland and shuddered at what the writers may have had in store for him but his is actually a relatively straight forward part even assisting Fuchsberger by apprehending a couple of baddies with some well placed judo throws. At no stage is anything ever made of his skin colour which makes for a nice change of pace from other productions of its time. 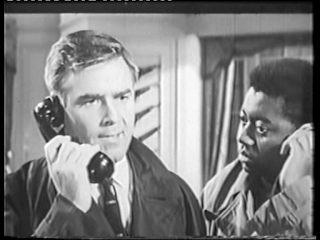 Eugenio “Gene” Martin, director of Horror Express, is named as one of the co-writers of this movie. The plot is pretty similar to that of other Krimis. A series of poison attacks of otherwise upstanding members of society reveals a connection to a cult of Kali and illegal gang activities by veterans of the British occupation in India. The gang leader behind the killings gives the orders from a giant TV screen. Those scenes ever so remotely bring back memories of similar scenes from Fritz Lang's M or the Mabuse movies.

The red herrings are thrown around left, right and centre and are actually quite successful in throwing a suspicious light on most of the supporting cast. The final reveal as such can therefore be considered a relative surprise. The only issue is that at the time the viewer may not give too much of a damn anymore as most of the characters are relatively bland and the film as a whole is not too involving. Part of the reason for this is that the soundtrack by Francesco De Masi is pretty moribund if at all existent. The film could have done with some of the disctinctive jazz influenced lunacy of Peter Thomas as opposed to the sedate barely noticable tunes of De Masi.

The more I watch movies by Reinl the more I am fascinated by the fact that he just seems to thrive on bondage scenes. Most of his films have characters strung up and often abused or tortured; and a lot of times he seems to share a morbid delight on inflicting this kind of torture on his real-life wife. And true to form this is no exception: Several characters are tied up badly and even killed while bound and Dor is only barely saved. Hmmm, I wonder whether this kind of cinematic abuse was part of the reason for the eventual divorce between this show star couple. 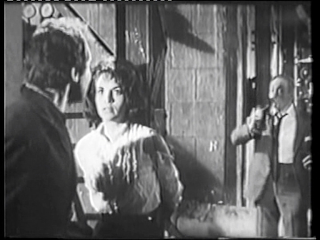 Overall, Der Teppich des Grauens/The Carpet of Horror is a very average but watchable Krimi. Not on a par with the best examples of this genre it still is entertaining enough to check out if you ever come across a copy. Watching the likes Fuchsberger, Dor & Co in a Harald Reinl directed movie is never a real waste of time. As such it is only regrettable that more could not have been achieved by an otherwise intriguing promise.
Posted by Holger Haase at 7:35 PM 2 comments: