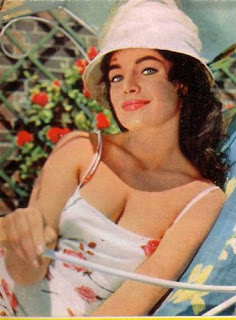 I recently watched Hotel der toten Gäste [Hotel of the Dead Guests] (1965), a German Krimi based on a novel by Heather Gardiner, an Australian mystery author who died in a car crash after just publishing two novels.

Despite having a truly Krimi-rific cast (including the likes of Joachim Fuchsberger, Karin Dor, Ady Berber and a bunch of others) it is just a bit Meh, relatively static and quite talky. Not really bad but nothing that tempts me to write much about it.

What did, however, intrigue me was seeing Renate Ewert again. I had previously only known her from the early Wallace movie Der rote Kreis/The Crimson Circle (1959) in which she played the female lead.

So when I spotted her again in Hotel I was intrigued to find out a little bit more about her and what had become of her.

And what I learned had me absolutely stunned.

Her life was tragic and short and she comes across as part Femme Fatale, part innocent victim for chasing the wrong kind of dreams, losing touch with reality and ultimately causing death and destruction all around her.

Apart from Hotel and Circle she also starred in Das Rätsel der grünen Spinne [The Mystery of the Green Spider] in 1960, a Krimi I have not yet had the chance to see (or even to find). 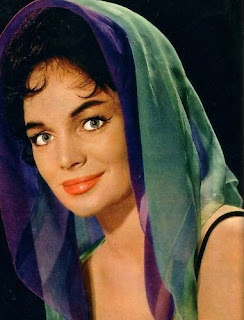 Her early life was marred by deprivations that were only too common in wartime and post-war Germany. Born in Königsberg/East Prussia (now Kaliningrad/Russia) she and her family were forced to flee their home, experience hunger and face often certain death on their flight from home and establish a new life from scratch in Hamburg.

As a teenager she already knew that what she wanted was a life away from all this misery and in the limelight.

She convinced her father not to let her finish school and instead went to acting classes and subsequently played in some roles on stage. The moment she gets hired for her first movie in in the third part of Joachim Fuchsberger's 08/15 trilogy of WW2 dramas, the theatre is forgotten about and in the following ten years she subsequently appears in more than 30 films, mainly musical comedies.

She can often be found in the gossip pages of news magazines and gains a reputation for lateness and for not always being too reliable on set. Though she is relatively well known at the time, she never quite hits true star levels of fame.

Instead she surrounds herself with influential men and appears to have had liaisons with the likes of Curt Jürgens and Paul Hubschmid (aka Paul Christian from The Beast from 20.000 Fathoms). In actual fact her relationship with Hubschmid seems to have been the reason for the suicide of the actor's wife Ursula in 1963. 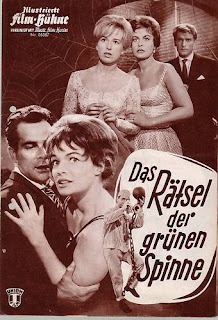 Hitting the big 3-0 resulted in serious mental issues for Ewert. Panicking about the appearance of her first ever so slight and possibly imaginary wrinkles she decides to get a face lift. It appears that someone then advised her to get as much sleep as possible in an attempt to combat the early aging signs so she takes to sleeping pills, blackens out her apartment windows with heavy sheets and lives in slumber land for the biggest part of the remainder of her life while gradually increasing the doses and becoming more and more unemployable. As a result of this life style she also seems to have simply forgotten to eat.

A few days after her death her corpse gets discovered by Susanne Cramer, a friend and fellow actress who was also to tragically die at the age of only 32 a short time later.

An autopsy reveals death by overdosis and a possible suicide. Ewert only weighs 35 kilos at the time of her death.

Distraught at the death of his daughter her father commits suicide a year after her by also taking sleeping pills. He is very soon afterwards followed by the mother who also poisons herself.

Today she is all but forgotten about in Germany and primarily known only as the girl from The Crimson Circle. I for one am glad to have watched Hotel around the 44th anniversary of her death and learned so much about her since then.

It pains me to see the life cut short of someone with such a promising career and such obvious (if maybe somewhat limited) talent. As a sign of my respect for her I will try and locate some more of her films and see if I can also locate more info about her in the coming months.
Posted by Holger Haase at 2:52 PM 2 comments: