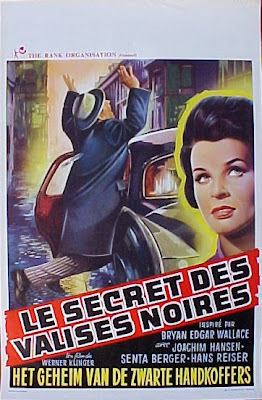 Artur “Atze” Brauner’s Bryan Edgar Wallace series kicked of with The Secret of the Black Trunk: A series of murders committed via an oriental knife leads Scotland Yard on the trace of a drug ring. All victims have just recently arrived in London and to their surprise discover shortly before their demise that their suitcases had already been packed for them. After the murders these cases all go missing.

The Secret of the Black Trunk is a solid start for the new Bryan Edgar Wallace series having many of the ingredients of the original and fulminates in a chase through some underground caverns that had also been used for other Krimis.

The male lead Joachim Hansen is a colourless character and a relatively unfamiliar face although he ended up having a long, though not very distinct film career. Following up on one single clue that could have easily been discussed on the phone, Inspector Finch is even allowed to travel to the United States under the tune of the Star Spangled Banner. Senta Berger brings star quality into this production. Confusingly enough we end up seeing her in captivity at one stage without ever being given the benefit of watching the actual kidnapping.

Chris Howland became a very popular discjockey in Germany. Born in London his distinct English accent became his trademark that also proved popular in a lot of Karl May movies and another Bryan Edgar Wallace Krimi, The Mad Executioners. In The Secret of the Black Trunk he plays an Eddi Arent like comic relief character, a collector of sounds who constantly stumbles across clues with the help of his portable reel-to-reel recorder.

The Secret of the Black Trunk is Wallace Lite, a quick fix if you don’t have the father’s movies at your disposal. Though full of illogical plot holes it does have some charming off-the-wall moments especially when we are confronted with one of the character’s nieces (Elfriede Irral) who for no apparent reason decides to dress as the Queen’s page boy. A tree with a Cyrillic inscription reading “MONTI 1945” gives away the fact that this was filmed in Berlin, not London. Helga Sommerfeld who is the film’s token sexy bar maid also featured in Playboy’s November 1964 issue as one of the “The Girls of Germany”. Director Werner Klingler’s next film was to be The Testament of Dr. Mabuse. The Secret of the Black Trunk was later to be remade by Jess Franco as The Corpse Packs His Bags.