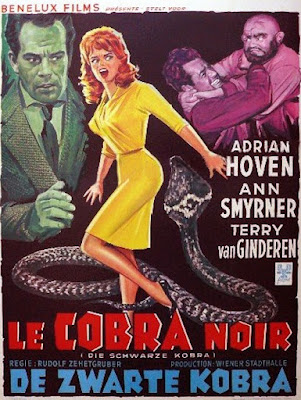 The availability of Krimis in an English friendly version has always been one of the main talking points amongst fans of the genre.

True, about two thirds of the Rialto Wallaces can be purchased from Germany via the import route but definitive Blu Ray (or even DVD) collections for the international audience are still nowhere to be seen. (Are you listening, Synapse or Severin?)

It gets even more frustrating when you realise that the German DVD of a standalone Krimi like Die schwarze Kobra/The Black Cobra (1963) does not contain an English track or subtitles even though the credits on this release are in English (“Director: Rudolf Zehetgrube” [sic]).

So clearly at some stage this was released abroad but, alas, for now the German version is all that is currently officially available…. unless one opts for the old Euro-Fantastico Double Feature DVD from 2010.

In a nice bit of synchronicity while I was preparing this blog post, YouTube’s ever reliable Old Movies B/W & Colour channel, however, has also come to the rescue and posted the English dub of The Black Cobra.

When Peter Karner (Adrian Hoven), a truck driver, is unknowingly transporting drugs, he becomes witness to a killing amongst two rival gangs (one of them run by the mysterious Mr Green) and is subsequently chased by both of the gangs and the police who suspect him of being the killer himself.

This Austrian Krimi is not based on any literary source and suffers from a confusing plot that ultimately does not make too much sense. For the most part we see various parties chasing someone who is not doing much hiding and instead pretty much operates in plain sight.

The direction overall is very pedestrian and the cinematography fairly flat, however, this production does come with a sufficient number of intriguing moments that will please the Krimi aficionado.

“The Black Cobra” is the name of the truck stop restaurant in which our hero openly hides for most of the time and that just also happens to be next door to a little animal show featuring the titular snake. In one otherwise unrelated scene the cobra goes on a rampage, threatens some of the bystanders and ultimately gets chased away by a mongoose. The fight between mongoose and cobra seems to be stock footage taken from a different movie and is one of the rare examples of mondo style animal cruelty in this genre.

A giant man-monster called Guba (Michel Ujevic in his one and seemingly only role) provides the right amount of chills.

The mysterious gang leader Mr Green offs his victims with the help of a retractable blade inside a walking stick.

And just who is Secret Agent X15?

We also get a secret passageway, a lunatic Baroness and the boobs of a nude desk statue provide some politically incorrect thrills (as well as clues). 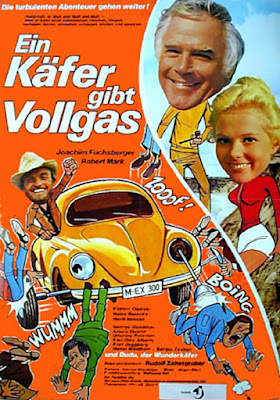 Rudolf Zehetgruber is a journeyman director who never reached the heights of more identifiable auteurs like Harald Reinl or Alfred Vohrer. He shot a handful of lesser known Krimis as well as two Konmissar X movies. In the 1970s he wrote, directed and starred in a Herbie “inspired” series of German comedies about a VW Beetle, one of which also featured Joachim Fuchsberger.

On top of the occasional gonzo scene that helps to brighten up the more lacklustre elements of the plot, the film is also chockablock with genre familiar actors.

Adrian Hoven makes the most of a fairly one-dimensional hero role. Much is made out of the character’s previous run-ins with the law, however, it appears that he only ever spent a few short weeks in prison so we’re talking more unpaid TV licence rather than seriously hardened criminal.

During the 1950s Hoven was the charming romantic lead in numerous movies. For Rialto he starred in Das Rätsel der roten Orchidee/Secret of the Red Orchid (1962) before alternating between art house (several films with Rainer Werner Fassbinder) and Eurotrash (his own produced, co-written and co-directed Mark of the Devil as well as a number of Jess Franco films).

Ann Smyrner is Hoven’s character’s love interest in this movie. She can also be seen in the Bryan Edgar Wallace film Das siebente Opfer/The Racetrack Murders (1964).

The main surprise of the movie is Ady Berber. Usually confined to small non-speaking supporting roles with a menacing presence (this film’s Guba character would normally be his forte), in The Black Cobra he has a fairly substantial speaking part as the owner of the mini-zoo providing regular assistance to our hero on the run. Softly spoken and very much a gentle giant Berber seems to relish the chance to finally demonstrate more of his talents. Hell, he is even allowed to tenderly play with some puppies! Needless to say, though, we still also get to see him wrestling some villains, most notably in a big bar room brawl. 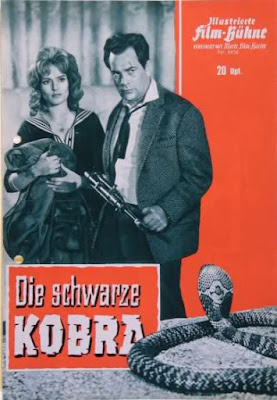 Of course, every film just gets better with Klaus Kinski in it. And here he is a drug addicted pianist who tries to play all sides as long as they can finance his addiction.

It is rare that Kinski acts alongside someone who can outcreep him but Klaus Löwitsch definitely gives him a run for his money. In later years Löwitsch would be on the right side of the law as macho crime fighter Peter Strohm in a popular German TV series. For The Black Cobra, however, he convincingly plays a psychotic killer on drugs who seems to relish his work quite a lot and at one stage hisses back at a wild cat which tries to threaten him.

Peter Vogel, Paul Dahlke and Hans Richter play the by and large colourless representatives of the law who find it difficult to stick out in comparison to the heroes and villains of this film. In the final showdown in a scrapyard they do get to shine a bit when the movie anticlimactically switches the focus away from the main heroes.

All in all, The Black Cobra is a very average standalone Krimi, however, with a number of infrequent standout scenes and performances that will lift this up to somewhat ever so slightly above average enjoyment.

For a quick rundown of some of those highlights watch this lengthy German trailer: