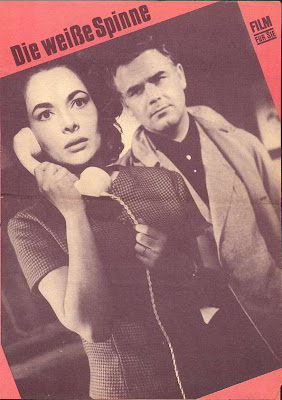 When her husband, a gambler, is found killed in a car crash with a white spider as a key ring in his possession (his talisman but also the symbol for one of London's most notorious contract killer gangs) the insurance company refuses to pay for his life insurance and his wife (Karin Dor) is forced to work for her living in a reform society for convicts where she meets Ralph Hubbard (Joachim Fuchsberger) who was recently released from Dartmoor. Scotland Yard strongly suspects the wife of being involved in the killing but also needs to take drastic measures when one leading policeman is found dead as well. They bring in a mysterious Australian crime fighter who prefers to hang on to his anonymity and conducts his interviews hidden from view by a couple of beaming lights. One-eyed men, strange Indians and oh-so altruistic priests all stand in the way of solving the mystery behind the killings that shock London.

For Arca-Winston this was their debut production that they followed up a year later with another Krimi Das Wirtshaus von Dartmoor/The Inn on Dartmoor before focusing on a dozen pseudo-documentary sex education movies. Hans Oppenheimer Film also didn't exactly set the cinematic world on fire with the couple of productions that they helmed.

Despite its non-distinguished parenthood The White Spider ended up being quite a fun Krimi entry and a step up from The Carpet of Horror. They obviously learned their lesson from looking at Carpet and not only hired its director Harald Reinl and the stars Joachim Fuchsberger (relaxed and likeable as usual), Karin Dor (way too irrationally panicky for my liking) and Werner Peters (in a surprise part playing a cop for a change) but also went a few steps further in Wallacefying the experience. 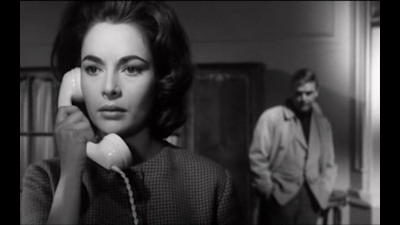 From the first scene onwards it becomes painfully obvious to the viewer what Carpet had been missing: Peter Thomas' weird jazzy kind of soundtrack, a screenplay written by an Edgar Wallace veteran and also more familiar faces in the supporting roles (as opposed to the Spanish actors that were by and large unfamiliar to the German public).

And The White Spider has all that in spades.

The screenplay was written by a certain Albert Tanner who was none other than Egon Eis who, under the nom de plum Trygve Larsen, had also been the writer of the very first Rialto Wallace, Der Frosch mit der Maske/Fellowship of the Frog and who provided just the right mix of secret doorways, hidden gadgets and men in masks galore for this movie.

And instead of Spanish unknowns we have familiar German faces in even the smallest roles:

Horst Frank surprisingly enough never appeared in a proper Wallace production but was a very familiar villain in many a German movie, the kind of guy who got hired when Kinski wasn't available and here plays a knife wielding ex-convict up to no good. Chris Howland in real life was a wise cracking English radio DJ who had tremendous success in Germany and was Eddi Arent's replacement in some of the Bryan Edgar Wallace movies. Also look out for Dieter Eppler as a lawyer, Friedrich Schoenfelder as Sir James, the head of Scotland Yard, and Mady Rahl as an ex-stripper past her prime who finds a very grisly death.

The movie is fast paced, good fun and just the right thing to watch when you have already gone through all the original Rialto productions. If anything it is actually quite brutal for the time in its on-screen depictions of strangulations courtesy of Reinl who just can't keep his paws off a good piece of rope.

One of the most fun scenes must certainly be when we see Fuchsberger's character interview an old lady who ends up being anything but and involves him in a furious fight sequence.

There are two things, however, that could be listed as The White Spider's main shortcomings.

First of all the budget does not seem to have expanded to a trip to London or to the nearest stock library and as such is missing the all familiar clips of Big Ben, Tower Bridge et al. Instead we have typical German side streets trying hard (and failing badly) to pretend they're Soho and wintry scenes of an icy Hamburg harbour standing in for the Thames. 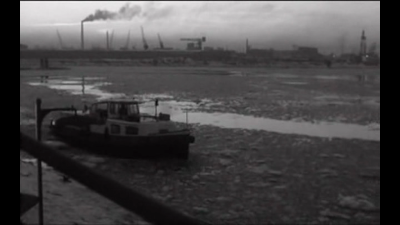 To make up for this lack of authentic scenery the crew appears to have taken every possible opportunity to plaster pictures of Queen Elizabeth II on every available office wall. Have a whisky for every time you spot a portrait of the Queen in The White Spider and you are bound to reach the end of the film in a comatose state. 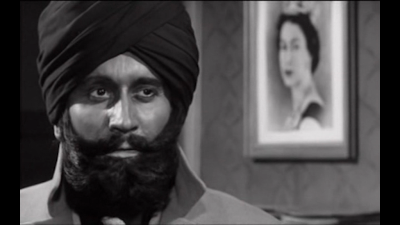 Worst of all, however, is the complete and utter lack of proper mystery. If you have found my blog you already know enough about the typical roles played by each actor to know who in truth is the mysterious Australian inspector. And does anyone really trust Werner Peters as a fighter on the side of law and order?

Also, if you read this blog it is proof that you still have your proper eye sight. As such you will not find it remotely difficult to see through all those disguises of the master villain's attempt at being a Man of Half a Dozen Faces (or more to the point: a RINGER replacement).

None of that, however, matters much as the fun that can be had from this Krimi far outweighs weaknesses in the story department. After all, one does not really watch those movies for Nobel Prize winning plots but for a certain sense of mood and intrigue that is available here in bundles.

Again, this production has never been released on DVD but if you venture into Soho's darkest alleys you just may come across some one-eyed men able to locate a copy with English subs provided you swear ever lasting allegiance to the secret society they represent.
Posted by Holger Haase at 7:35 PM No comments:


A set of lobby cards from my collection for one of the later Rialto Edgar Wallace movies: Im Banne des Unheimlichen (1968, aka The Zombie Walks or The Hand of Power for you Anglophones). Click on the pictures to get the full size scans. 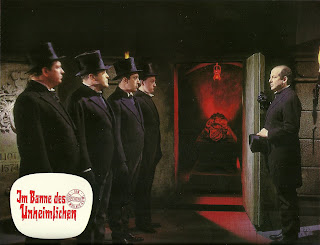 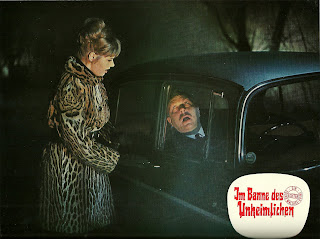 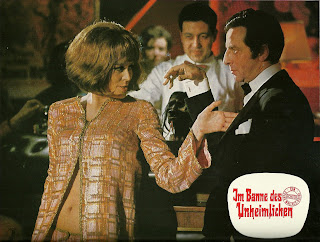 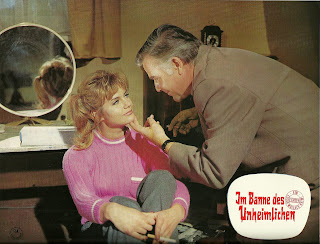 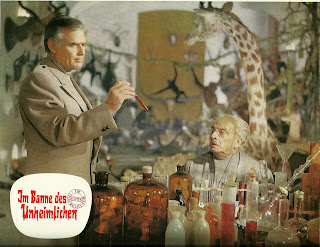 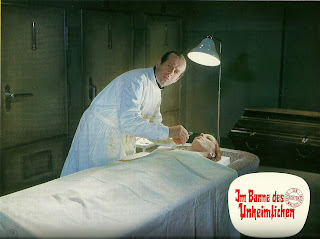 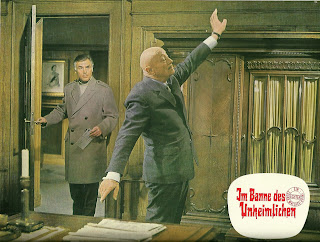 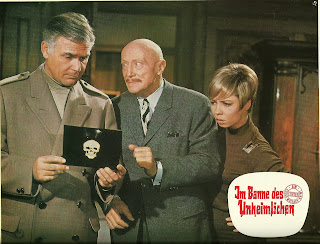 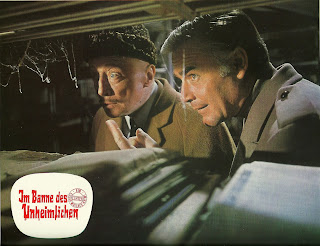 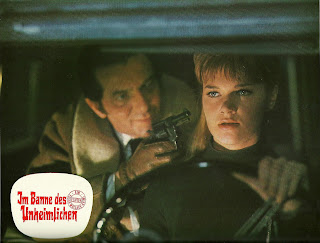 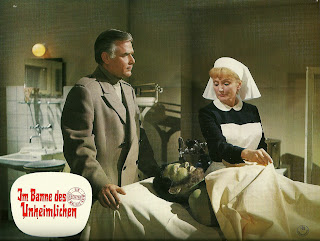 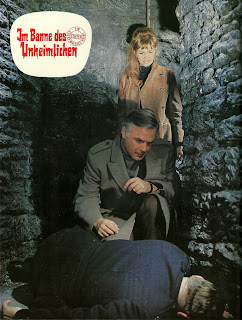 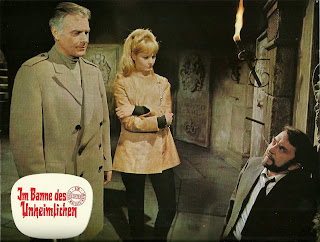 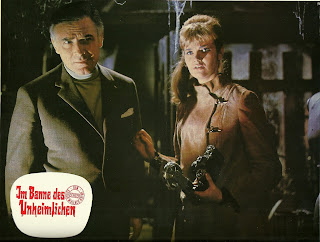 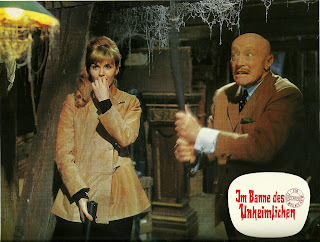 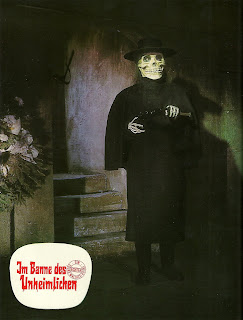 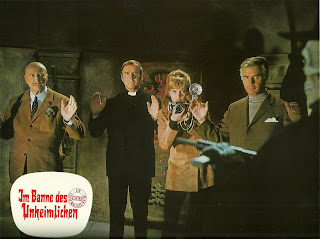 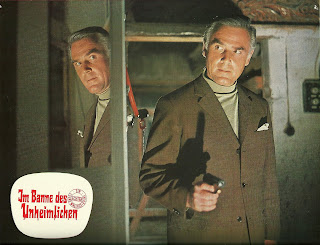 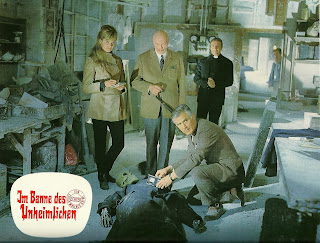 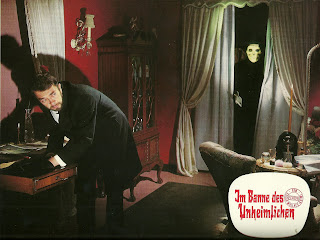