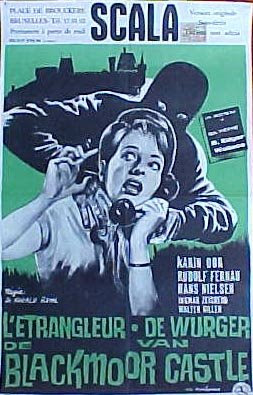 On the eve of his knighthood, Lucius Clark’s (Rudolf Fernau) dodgy colonial past comes back to haunt him. He is in illegal possession of millions worth of raw diamonds that are hidden amongst the secret vaults of Blackmoor Castle and that an anonymous strangler is aiming to unearth.

Overall The Strangler of Blackmoor Castle is a very pedestrian affair. Action director Harald Reinl does not shine in a lot of scenes and the film just keeps plodding along at a very leisurely pace. Most of the actors (Hans Reiser, Harry Riebauer) are unfamiliar faces without the slightest bit of charisma and even Karin Dor is very mousy and unmemorable in this production. Dieter Eppler also shows up from the Rialto series as a diamond obsessed butler.

Composer Oskar Sala wrote a track that unlike most other Krimi scores just uses electronically manipulated sounds. Though interesting as a concept and well ahead of its time, this is an experiment that ultimately fails as these sounds are incredibly slow and monotonous and only underline the film’s general lack of direction. Sala put a similar concept to much better use for Hitchcock’s The Birds.

The identification of the killer also centres on the fact that he only has nine fingers, yet no-one seems to have been aware of this more than revealing missing digit in the case of the true perpetrator of these crimes.

But all is of course not lost with this production: The film features a scene in which a biker gets decapitated by a steel line cast across the street, a scene more violent than usual for the time. Decapitations appear to be quite common around Blackmoor Castle. One of the victims who manages to keep his head on then has the letter M cut into his forehead, a nice homage to Fritz Lang. Walter Giller in kilt and massive handle bar moustache makes for one of the most entertainingly ludicrous Teutonic Scotsmen the Krimiworld has ever seen. And Ingmar Zeisberg as a fake blonde and gangster moll oozes sex appeal out of her low cut tops. Even a telephone operator manages to identify her as a Blonde just by listening to her voice! Zeisberg was to return back to Krimi territory that same year with The Inn on Dartmoor (1964).

The Strangler of Blackmoor Castle proved to be a resounding commercial success and pathed the way for further Bryan Edgar Wallace adaptations: Next on the list was the strange Mabuse/Wallace hybrid Dr. Mabuse Vs. Scotland Yard (1963).