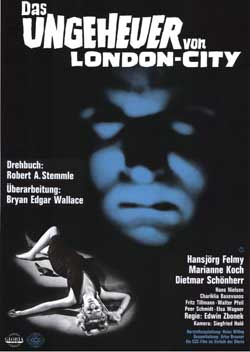 A play in the Edgar Allan Poe Theatre depicting the murders of Jack the Ripper leads to a number of copycat killings in the film’s contemporary London.

With The Monster of London City Edwin Zbonek returned to familiar Bryan Edgar Wallace territory after his previous directorial stint for The Mad Executioners.

Though much is made of the fictitious play’s apparent accuracy towards the Autumn of Terror, a lot of the details are more part of Ripper fiction. The whole stance of having a West End play spark a series of vicious murders and invoke debates to have the drama banned is not so much thought provoking, but exposes the more typical middle class, conservative audience of the 1960s Krimis. At a time when London started to swing, students worldwide were on the verge of revolt and pop culture became a political force it must have been comforting to see a rather old fashioned drama involving actors wearing suits and ties causing a stir. And potential son-in-laws would still ask a father for the daughter’s hand. Not exactly Helter Skelter.

But then again, Krimis were never shot to deal with serious social issues, but first and foremost served as pure escapist entertainment. And though not a master piece, this film does give us a healthy dose of midnight murders and red herrings. We even get short glimpses of black and white nudity and a scene with a child witnessing one of the murder scenes would later become a common motive in Gialli. Overall this is one of the best Bryan Edgar Wallace movies.

Hansjörg Felmy is slightly miscast as the drug riddled troubled soul of an actor who finds it ever more difficult to separate reality from fiction. Dietmar Schönherr is his doctor and friend. He would later turn into a popular German talk show host like his colleague Joachim Fuchsberger. Marianne Koch as the girl admired by both later got a medical degree and became a celebrity doctor.