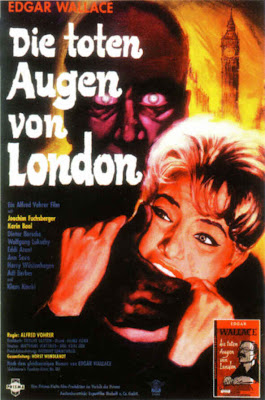 A gang of blind peddlers terrorise London under cover of night and fog and kill rich visitors from overseas who all had insurances with the same company. Messages left behind in Braille give Scotland Yard the first clues as to the identity of the killers.
Dead Eyes of London was Alfred Vohrer’s Wallace debut. With 14 Krimis he was soon to turn into Rialto’s most proficient director.
In this movie he already established a lot of his typical cinematic quirks that were often reminiscent of Dario Argento’s ideas a decade later: The camera films a mouth wash from behind a set of teeth; Kinski’s dark sun glasses clearly reflect a roulette table and Harry Wüstenhagen’s image; a victim’s eyes are shown approaching through a little spy hole in a wall shortly before he’s being shot.
Vohrer’s most ingenious directorial ideas, however, were in the use of classical music. In contrast to most of the other Wallace movies which generally relied on specially composed, often jazzy, tracks, Vohrer opted to have Beethoven’s 5th symphony played to accompany scenes of torture, murder and general mayhem, a device which predates Kubrick’s similar use of the composer’s music for A Clockwork Orange by more than a decade.
Although this was also Klaus Kinski’s Rialto debut he had his first Wallace outing a year earlier in Kurt Ulrich Film’s rival production Der Rächer/The Avenger (1960).Though his character can see, he is constantly wearing large, dark sun glasses that obscure his eyes and underline his involvement with the gang of blind men. Any time he removes his glasses, he goes into widely staring overdrive.
Joachim Fuchsberger unsurprisingly plays the lead, a Scotland Yard inspector. What else?
Eddi Arent is his colleague and comic side kick who knits woollen jumpers incessantly in order to calm his nerves and is nicknamed “Sunny” on account of his cheerful disposition.
Dieter Borsche is a blind Reverend who runs a soup kitchen for blind down and outs. Or is he?
Karin Baal is a young girl who reads Braille and helps Scotland Yard by going undercover in Borsche’s church community.
Franz Schaftheitlin introduces the character of Scotland Yard’s Sir John who was subsequently played by a couple of different actors until finally finding his quintessential interpretation with Siegfried Schürenberg from Die Tür mit den 7 Schlössern/The Door With Seven Locks (1962) on.
The film’s most memorable part, however, is cast with Ady Berber. His Blind Jack, a big, blind brute of a man, is the kind of iconic role that would otherwise have been cast with Tor Johnson or Milton Reid and like these two he also was a professional wrestler before going into films. His hulking, threatening presence is emphasised by the fact that he never seems to utter a word and just looms quietly. His massive, hairy hands that he uses to choke his victims are genuinely frightening. When we finally hear him talk, he begs for his life in incomplete baby-ish kind of German, just to emphasise the childlike mind set that is hidden behind his murderous persona.
Dead Eyes of London is a relatively violent Wallace production for its time. We see a torture chamber complete with specially designed drowning tanks and attacks by Bunsen burner. We also have smoky gambling joints, a happy hooker with strong Eastern European accent, a death through an elevator shaft, a TV set that shoots bullets and a skull that doubles as a cigarette dispenser.
This is the first Wallace Krimi that presents the title sequence blood red on top of the otherwise black and white images - a gimmick that was soon copied by other Krimis outside the Rialto series - and is overall one of the best of the early Wallace series.
Dead Eyes of London was previously filmed in 1939 with Bela Lugosi and Rialto themselves subsequently made an unofficial remake of sorts with Der Gorilla von Soho/Gorilla Gang in 1968 again directed by Vohrer.
Posted by Holger Haase at 10:50 AM