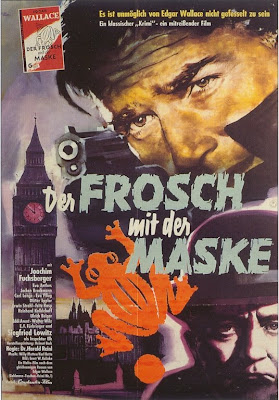 The Harald Reinl directed film that started the whole Krimi wave already has all the ingredients one came to expect from the series.

A criminal master mind dressed up in an off beat costume - ever thought anyone could be scared of… a frog? – terrorises foggy London with his dock side murder gang. Red herrings and dodgy characters are abound; several plot layers cleverly intertwined.

Siegfried Lowitz plays an underappreciated Inspector Elk - Hedge in the English version - who turns deaf at convenient moments. Joachim Fuchsberger is Sir Archibald’s (E.F. Fürbringer) American playboy nephew and amateur detective and teams up with Lowitz to expose the Frog and woo the leading lady (Elfie von Kalckreuth, later to become a very popular German TV announcer, plays under her then pseudonym Eva Anthes). Eddi Arent is his butler and comic relief who also gets to practise some judo tricks on him.

Fritz Rasp plays Maitland, a genuinely scary boss from Hell and prime suspect who teaches Ray Bennett (Walter Wilz) how not to apply for a pay rise. The menace of his character is further highlighted by the fact that – bar a couple of sentences in his last scene – he never utters a word and only communicates through frightening glances. Eva Pflug gets to sing - or at least lip synch - a song about not being left alone on a foggy night at the Thames.

With the mysterious and even tragic figure of Old Ben, the executioner (Carl Lange), Fellowship of the Frog manages to capture one of the series most fascinating and memorable characters.

One of the suspects of the film (and the true culprit of the source novel) is called Harry Lime. Though Orson Welles’ Third Man is the more famous name sake, Wallace created his character nearly a quarter of a century before Graham Greene wrote the script for Carol Reed’s movie.

The film was shot in Copenhagen. Stock footage of London was shot over two days and added in to create more genuine British atmosphere.

Overall this was an excellent start to the Wallace series and rightly acted as a pattern for further episodes of the series. In the characterisation of its protagonists, this film still has a bigger emotional impact and slightly more depressive mood than any of the other later Wallace Krimis that are more action oriented.