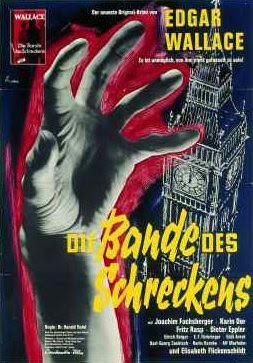 Just minutes before being executed Clay Shelton (Otto Colin) vows he will take revenge from the grave and kill all those responsible for his capture. He swears it by his “gallow’s hand”. Inspector Long (Joachim Fuchsberger) who is present and a known gambler places a bet against this, but will soon start doubting the sanity of this judgement when several murders are committed under the sign of the gallow’s hand. Shelton is seen present at some of the crime scenes and his corpse has mysteriously left his coffin.

The Terrible People from all the Wallace movies until then has by far the highest body count. Within the first 20 minutes of the movie hardly a scene goes by without a more or less ingenious murder: The hangman ends up in a noose. A telephone shoots bullets. We also have a gal in a swimsuit (Karin Kernke) who caresses a cheetah and is very adept at throwing knives. Kernke had previously lost her head in 1959’s wacky production of The Head where she plays a hunchbacked nurse whose (you guessed it) head gets transplanted to the body of a stripper.

The final solution again comes as quite a surprise, though doesn’t bear too much thinking about as it really doesn’t make a lot of sense.

This is Harald Reinl’s second Wallace Krimi, and the first that he shot with his wife Karin Dor. Dor gets tied and bound twice in this film. Those bondage scenes are something of a specialty for Reinl who later on relished in these with his stint for the Jerry Cotton movies.

Eddi Arent plays a police photographer who faints every time he sees a corpse. Fritz Rasp for a change plays a relatively positive and less sinister figure than in his previous outings. He is Inspector Long’s aristocratic father. Long’s friends call him “Blacky”, i.e. Fuchsberger’s real and well known and publicised nickname. Elisabeth Flickenschildt, the Grande Dame of German stage and film, has her glorious Wallace debut has Mrs Revelstoke, a domineering lady who does not appear to be afraid to be on Shelton’s Death List and lives in a manor full of quaint gadgets.