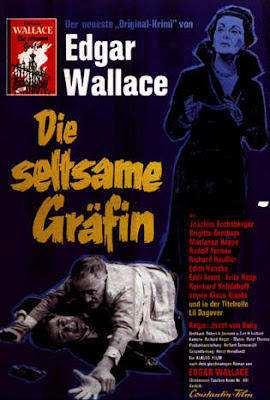 Does the world really need another film related blog? Well, if it is dedicated to Krimis, I think it does as this is one genre that – at least in English – has not been written about too much yet and deserves to be more fully explored.

“Krimi” is a German term. It is the short form for either “Kriminalroman” (crime novel) or “Kriminalfilm” (crime movie) and in German can refer to any crime or mystery related novel or film. An Agatha Christie novel e.g. would be a “Krimi”. A Film Noir? A Krimi. A Sherlock Holmes story? Yep, you guessed it: That, too, would be considered a Krimi in the Fatherland.

In the English speaking world and amongst movie buffs, the term “Krimi” is more closely associated with a series of German film productions from the late 50s to the early 70s. Following the success of the Edgar Wallace adaptation Der Frosch mit der Maske/Fellowship of the Frog in 1959, dozens of other Krimis were produced for more than a decade. The series finally came to a stop with its last adaptation Das Rätsel des silbernen Halbmonds/Seven Blood Stained Orchids (1972), a film that was co-produced with Italy and features in lots of giallo overviews. I would personally define the Jess Franco movie Der Todesrächer von Soho/The Corpse Packs His Bags as the last true Krimi production. Though filmed in April 1971 it didn’t hit the German cinemas until November 1972 and as such marks the real true end of an era.

The following series would all constitute Krimis and will over time all be covered in this blog:

A cursory glance at this list will show that there may at times be a certain amount of overlap with other sub-genres such as Giallo, Eurospy or even Science Fiction.

While I will focus primarily on these movies I can envisage to occasionally also focus a bit more on the talent in front of and behind the cameras. Krimis had their fair share of easily identifiable talents, either in form of the actors (Klaus Kinski anyone?), directors (Alfred Vohrer, Harald Reinl) or composers (Peter Thomas) to name but a few.

Looking forward to sharing those reviews and initiating some discussions with all of you about one of my favourite genres.
Posted by Holger Haase at 12:44 PM