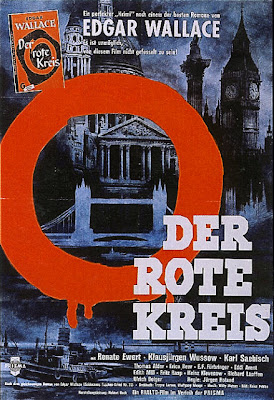 The Crimson Circle, the film’s eponymous bad guy, bears an uncanny resemblance to Walter Gibson’s Shadow: In his first pulp fiction outing, The Living Shadow (1931), the character saves Harry Vincent’s life by preventing his suicide from jumping off a bridge and subsequently makes Vincent one of his crime fighting agents.
The Shadow wears a broad brimmed hat and cape and can be identified by his very distinct laugh. One of the later novels is even titled The Shadow Laughs. Halfway through the film The Crimson Circle prevents a bank manager from jumping to his death. He, too, wears similar looking hat and cape and can be identified by his laugh. In one scene we see several policemen cackling away in the vein attempt to help spur a witness’ memory.
Edgar Wallace’s source novel pre-dates The Shadow’s debut by a full nine years. Of course, The Crimson Circle is no crime fighter like The Shadow, but on the other side of the law.
Eight years previously his execution in France was botched up by a drunken henchman who overlooked a nail stuck in the guillotine. The Crimson Circle subsequently escaped and went on a killing and blackmailing spree. He always leaves behind the mark of a red circle as his calling card.
Klausjürgen Wussow and Karl-Georg Saebisch repeat the previous film’s buddy team of old Scotland Yard Detective and young private eye. Saebisch returned to the Wallace canon in the next film where he played twins in a double role.
This film proved to be the only part in the Rialto series for Renate Ewert who plays seductive and mysterious Femme Fatale Thalia Drummond. The actress ended her life prematurely by committing suicide in 1966.
Fritz Rasp has his second Wallace outing, this time as misanthropic cheapskate and millionaire Froyant, another one of The Crimson Circle’s victims.
Eddi Arent is a Yard detective who draws a lot of attention to himself by appearing in a variety of different disguises.
The revelation of who is behind the mask does come across as a real surprise twist and is supported by the fact that the voice of the man behind the mask is dubbed by a different actor than the one playing the part.
The Crimson Circle was a movie debut for Jürgen Roland. He had previously become known as director of the German TV Krimi series Stahlnetz (“Net of steel”). As an in-joke the credits of this movie are played on top of an image of a net of steel.
Posted by Holger Haase at 3:34 PM