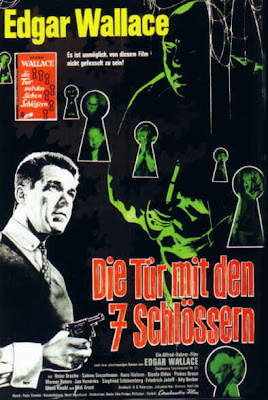 One by one the owners of seven keys for a door leading to a mysterious treasure get killed off.

The Door With Seven Locks marks the Rialto Wallace debut of hedgehog lookalike Heinz Drache. He was previously seen in CCC’s The Avenger and an incredibly popular German TV star thanks to the mega success of the TV series Das Halstuch, based on Francis Durbridge’s novel The Scarf. Drache plays Inspector Martin, amateur Magician and fan of Krimi radio shows, who is assisted by Eddi Arent.

Siegfried Schürenberg also made his Wallace debut as Sir John. Klaus Kinski has an ultra short part as a Mac wearing nervous crook who approaches Inspector Martin for help and gets killed pretty much instantaneously.

Another Wallace debutant is Werner Peters who hams it up wonderfully as Bertram Cody: In one scene we seen him sitting on a throne-like chair that is quite obviously too large for him. His legs keep dangling in the air. The chair is in the shape of an African woman with legs ending in high heel shoes; its body contains a record player that plays Bach’s Toccata, a piece that Cody’s wife (Gisela Uhlen) pretends to play on an organ which in actuality hides a house bar.

Unfortunately, those inspired moments of madness are few and far between in this production. For its first hour The Door With Seven Locks is a very pedestrian affair with little to speak of in its favour. In the last half hour, however, it switches gears when Pinkas Braun’s Dr. Antonio Staletti surprisingly brings us into Mad Scientist territory.

We have previously seen Ady Berber killing people as a wonderfully sweaty brute with a huge scar around his forehead who gets distracted in a surprisingly innocent childlike fashion by a music box that plays God Save the Queen. We now discover that he is the result of one of Staletti’s experiments aimed at creating an immortal Übermensch by transposing human heads on simian bodies. We see Pinkas Braun holding a skull in true Hamlet style while an actor in ape suit grimaces behind the bars of an underground laboratory. When exposed as a charlatan, Braun goes into maniacally cackling overdrive and jumps on his laboratory table while shaking his head uncontrollably. One of Germany’s best and most OTT cinematic Modern Day Frankensteins who manages to save an otherwise very mediocre Wallace production.