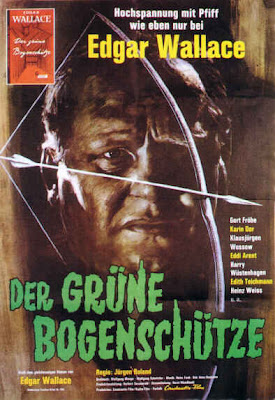 If it wasn’t for the domineering presence of Mr Goldfinger himself (Gert Fröbe) this Wallace film could otherwise be considered something of a flop as the film is trying too hard to be ironically self referential in a pre-Scream kind of way.

Eddi Arent knowingly introduces himself to the camera at the start of the film questioning why people would even want to see it. At the end he explains that some shooting in the background was the noise of the next Wallace movie being made, then unknowingly gets shot by the archer and asks the audience to leave the arrow behind should they find it in the cinema. During the film he regularly glances into the camera and at one stage mentions that he saw a similar murder before in Stahlnetz, director Jürgen Roland’s TV series. These scenes are trying very hard to be playful winks for the viewer – and already indicate how successful the Wallace series has become with only its forth outing -, but in reality they are just plain annoying and interrupt the viewing pleasure.

While trying to score points with a contemporary knowing audience, the film forgets to properly concentrate on its thriller aspects by making the Green Archer of the title a completely secondary figure with nary an important scene until well past the film’s halfway mark.

But it is Fröbe who saves the day. His roaring and screaming bully of a man is one of the series best ever performances. When we first see him he descends from an airplane’s gangway and (at least in the original German score) shouts in his native Saxonian accent that, as an American millionaire, he shouldn’t be a suspect in the Archer murder. That’s rather funny as it is the equivalent of having a Good Ol’ redneck boy from the Deep South pretend he’s French!

We also have Karin Dor in a hot pant pyjama and pony tail and Klausjürgen Wussow in his second and final appearance in a Wallace film. He plays an undercover Scotland Yard inspector and Master of Disguise who wouldn’t fool a blind man with his tricks. We also have Stanislav Ledinek as a Bar Manager: He’s big, he’s bald, he’s brute, wears sun glasses and looks like an overblown Easter Egg. Heinz Weiss (Jerry Cotton’s Phil Decker) has a small, but important role. And even in the middle of a gun battle English police insist on their traditional tea break. An informer strikes himself with a whip when calling the police. Fröbe’s character hides girly pictures in a drawer and his mansion has an abundance of secret doorways and passages.

Looking back at it: Maybe the film isn’t so bad after all.