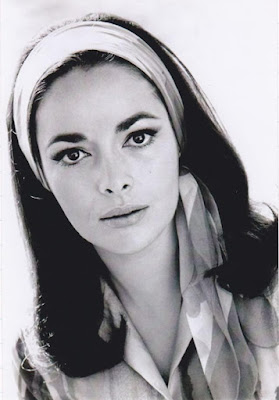 “Miss Krimi”, Karin Dor was one of Germany’s most popular actresses and the female face and figure head for the German Krimi-wave, the female equivalent for her frequent partner in crime (or should that be: crime fighting) Joachim Fuchsberger.

Yet ironically, even though her image was so closely related to Krimis she actually only featured in five of the original Rialto Edgar Wallace series in the early years of the Krimi wave (The Terrible People, The Green Archer, The Forger of London, Room 13, The Sinister Monk), however, did also star in a number of rival productions as well: The Invisible Dr. Mabuse, The Carpet of Horror, Die weiße Spinne [The White Spider], The Strangler of Blackmoor Castle (inspired by Bryan Edgar Wallace), The Secret of the Black Widow and Hotel der toten Gäste [Hotel of the Dead Guests].

She was so popular in that field that she even became one of the leads in the colour production Ohne Krimi geht die Mimi nie ins Bett (1962). Not a Krimi parody per se, the title as well as the popular title song, however, roughly translates as “Mimi never goes to bed without a crime novel” and references a Krimi addicted character, something very familiar to many in 1960s Germany.

Together with Joachim Fuchsberger she also helmed The Face of Fu Manchu (1965), the first of five Fu Manchu films starring Christopher Lee.

In her roles, Dor predominantly represented a non-threatening beauty that men could chastely admire and women could aspire to without ever feeling threatened. Known for her powerful screams, she was a genuine Scream Queen before that term was invented and was the quintessential damsel in distress that needed saving by the hero with whom her characters would typically become romantically involved by the end of the film. Her typical character was more passive victim than active participant and both in her Westerns as well as her Krimis (and especially when directed by her husband) she ended up frequently tied up.

For the most part there wasn’t much fatale about this femme and even when she starred as the first and so far only German Bond Girl in her biggest international success You Only Live Twice (1967), she did not display the Phoaaarrrr kind of sex appeal of that is often associated with that type of role.

Dor was so typecast with the role of the helpless victim that it came as a total shock when she was finally being outed as the razor blade wielding psycho serial killer in the proto-giallo scenes of Room 13 (1963). 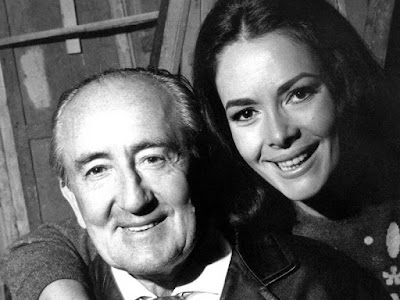 As a school girl she already attended acting classes and worked as an extra in some movies.

In Harald Reinl’s Rosen-Resli (1954) she had a small role and only spoke one line but the 16-year old caught the attention of the director who was not only 30 years her senior but also one of Germany’s most influential and powerful film makers.

They got romantically involved and soon after married. In order to obtain her wedding licence Dor pretended to be 2 years older than she was which over the years led to misinformation as to her true year or birth.⁠

In the early years her husband was the main driving force behind her career. Following Rosen-Resli he next cast her the same year in Der schweigende Engel [The Quiet Angel] in a more important role. They shot 20 movies together including the majority of Dor’s Krimi output starting with Die Bande des Schreckens/The Terrible People (1960) as well as Der Schatz im Silbersee/The Treasure of the Silver Lake (1962) and Winnetou - 2. Teil/Winnetou: The Red Gentleman (1964), two entries in the popular series of Karl May Westerns, and Die Schlangengrube und das Pendel/The Torture Chamber of Dr. Sadism (1967), a rare German Gothic Horror film re-uniting her with her Karl May co-star Lex Barker and Christopher Lee.

They had a son, Andreas Reinl, who was born in 1955 when Dor would only have been 17. Andreas Reinl also became an actor and had his first role in 1980 in the 13th and final part of the Schoolgirl Report series of popular faux sex documentaries. 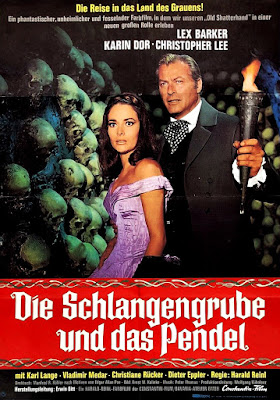 Karin Dor had her first involuntary international exposure with The Bellboy and the Playgirls (1962) when a very young Francis Ford Coppola was hired to re-cut and re-dub one of her German movies, 1958 production Mit Eva fing die Sünde an [Sin began with Eva], and added additional newly filmed nudie scenes for the American market.

Dor first gained popularity in a number of “Heimatfilme”, harmless comedies and other wholesome productions. Heimatfilme were a German phenomenon at the time. “Heimat” is a term that can roughly be translated with “homeland” or “motherland” and is a quintessential German term with lots of implications of home soil, being routed in the place you were born in etc. Heimatfilme were movies set in glorious countrysides, often in the mountains of Bavaria and depicting a clichéd perfect world and a naive antidote to the horrors of the recent war.

In the first half of the 1960s she became Krimi’s Leading Lady but also appeared in various other genres such as Western Movies (where she most prominently played Ribanna, Winnetou’s great tragic love interest in Winnetou: The Red Gentleman), adventure films and historical epics (the two-parter Die Nibelungen, at the time Germany’s most expensive production, was directed by her husband and a remake of a silent Fritz Lang classic), as well as Euro-Spy (The Spy with Ten Faces, 1966) and Euro-Horror (Paul Naschy’s Assignment Terror, 1970).

Her biggest international success next to You Only Live Twice - where she played a redhead hench-woman who ends up being killed in Blofeld’s piranha pool - was in Topaz (1969) where she is arguably at her most stunning as the head of a Cuban resistance group who is quite literally in bed with both sides. Even her death scene in a purple dress is beautifully staged by Alfred Hitchcock. It’s just a pity that, even though not devoid of some great set pieces, it’s still one of the lesser Hitchcocks.

Dor also appeared in a couple of popular US TV Shows: It Takes a Thief (next to Robert Wagner and Fred Astaire), Ironside and The F.B.I.

With the 1970s the time of big international productions was slowly coming to an end. Still reeling from her divorce in 1968 and battling cancer, she returned back to Germany where German commercial cinema lay all but dead after a new wave of German film directors had declared that “Grandpa’s Cinema Is Dead”.

Dor occasionally still played in smaller movies but until the end of her life became a semi-regular fixture in a variety of German TV series and also extensively toured Germany in a string of popular theatre productions.

Between 1972-74 Dor was married to Günther Schmucker, heir to the Asbach Weinbrand dynasty.

In 1985 Dor married stuntman George Robotham with whom she lived in residences in L.A. and Germany. The two of them stayed together until his death in 2007.

Following an accidental fall in 2016, Dor suffered brain injuries that ultimately required her to stay in a nursing home in which she passed away the following year.