The Face of Fu Manchu 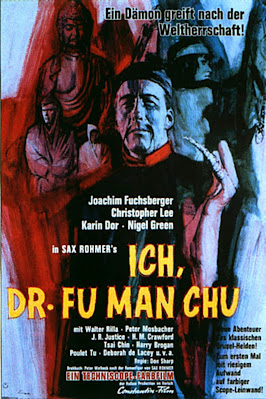 The Face of Fu Manchu was a co-production with Constantin Films from Munich so this features a number of German stars that add a lot of Krimi vibes.

Fuchsberger is clearly doubled in some of the fight sequences which is atypical for him as he was an experienced Yudoka and did most of the stunts in the Krimis himself.

As similar as their performances are in this film in comparison to their Krimis, there is a major difference here: For Face Dor and Fuchsberger play a married couple whereas in the Edgar Wallace movies (or their clones) they usually play characters that during the course of the mystery meet, get attracted to each other and then by the end of the movie finally get together (usually after Fuchsberger saves Dor).

As such Face nearly feels like a continuation of one of their Krimi adventures.

Also Walter Rilla plays Dor’s father. Rilla had not just acted in the Edgar Wallace Krimis Der Fälscher von London/The Forger of London (1961) and Zimmer 13/Room 13 (in which he is also Dor’s father with Fuchsberger as her suitor, 1964) but in several of the 1960s Dr Mabuse movies had played Prof. Pohland, the head of the psychiatric institution in which Mabuse ends up. Pohland’s mind eventually gets taken over by Mabuse and he becomes his de facto successor.

And in Face he is now a scientist on the verge of developing a super lethal poison who gets kidnapped and forced to work for Fu Manchu.

Did I mention that though notably set in the 1920s, this movie appears to be based in some imaginary time frame with cars, planes and fashion often belonging to different decades?

The early Sax Rohmer novels had quite a Holmes/Watson vibe in the dynamics between Sir Nayland Smith and Dr. Petrie that is carried over to the pairing of Nigel Green and Howard Marion-Crawford.

So with all that in mind…. Am I alone in thinking how amazing a Wallace/Fu Manchu/Sherlock Holmes/Mabuse mashup would have been? The mind just boggles at the thought of it but at least in my overactive imagination the seed of such a project is already hidden in The Face of Fu Manchu. 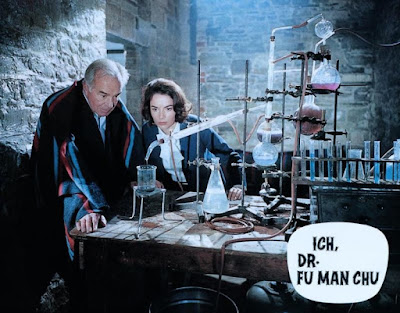 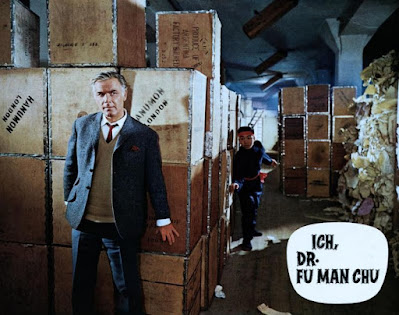