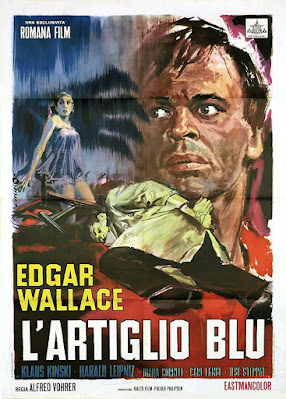 Despite appearing, with sixteen performances, in every second Rialto Wallace (plus a number of related appearances in other similar German crime dramas of the period), Klaus Kinski rarely ever got the chance to star in one of those movies.

Creature with the Blue Hand/Die blaue Hand (1967), directed by Alfred Vohrer, is one of the few exceptions.

And we don’t just get Kinski once but (at least for a short period) twice as he plays a pair of twins, Dave and Richard Emerson.

Dave is being convicted for the murder of a gardener at his family’s estate, considered insane and subsequently incarcerated in a mental institution. In order to convince the judge that he is totally compos mentis, Dave jumps towards the bench and does a spewing and foaming Kinski, declaring his innocence.

And strangely enough for a production that for a large part deals with all matters of insanity, this is pretty much the only time we see the actor letting loose. For large parts, Kinski here gives a very subdued but nevertheless mesmerising performance.

One night Dave manages to escape from the asylum with the help of a mysterious stranger and he legs it to his family castle, conveniently located just a short distance away from the institution. Alas, while on the run a nurse and a warden get killed and suspicion falls yet again on Dave. 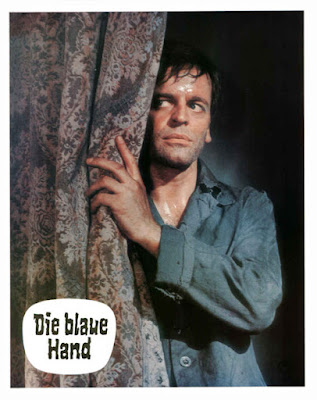 After arriving at the castle his brother Richard happens to vanish and Dave decides to slip into his twin brother’s clothes and impersonate him, a ruse that only the resident Scotland Yard detective (Harald Leipnitz, also in Der unheimliche Mönch/The Sinister Monk and Die Gruft mit dem Rätselschloß/The Curse of the Hidden Vault) sees through fast and yet despite dealing with a convicted killer, suspected of two further murders and officially declared insane, he and his boss Sir John (Siegfried Schürenberg) allow Dave to continue the charade in order to help with the investigation and flush out the real killer.

Creature with the Blue Hand is one of those productions that, if you were brave enough to attempt an in depth plot analysis, would lead to an utterly byzantine labyrinth of incomprehensible madness.

Nothing and no-one is as they seem. Twists are thrown at the audience in regular intervals. And everybody seems to have secrets, dual personas and hidden agendas abound.

Yet, it’s such a well executed, good looking, fast moving and most of all fun piece of 1960s Krimi exploitation that few people would ever dare question the logic behind the plot. (And those that do, just need to chill.)

Though nominally based on Edgar Wallace novel The Blue Hand (1925), the film contains practically nothing from its source and instead features a completely new plot. Rialto had previously already commissioned two vastly different scripts also very loosely based on the novel. For the film version a third script by Herbert Reinecker (aka Alex Berg in the credits) was finally used.

In the novel (and somewhat similarly in the previous two scripts) the “blue hand” refers to blue hand prints left behind as mysterious symbols. In the film, however, the blue hand is now the murder tool. The killer is a hooded henchman who kills with the aid of switch blades hidden in a blue gauntlet taken from a knight’s armour belonging to a legendary French ancestor of the Emerson family.

Though mansions and castles often feature prominently in the Edgar Wallace films, they are usually placed in urban areas (courtesy of stock footage of London). Creature with the Blue Hand is devoid of that and for the most part plays in two locations: the spooky castle of the Emersons and Dr Mangrove’s mental institution. 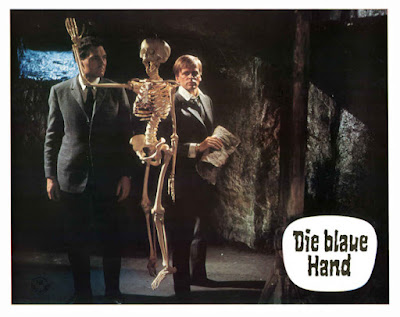 As a result of that there is an even stronger focus on Gothic tinged horror in a modern setting than normal at the expense of the familiar crime thriller aspect.

The castle set allows Vohrer to go all out with Bavaesque colour schemes and his trademark unusual angles (e.g. faces filmed and distorted when shot through a wine glass).

As can be expected in a Wallace film, there seem to be more secret doors and alleys in that residence than regular walk ways. And let’s not forget the bizarre assortment of creaking knight’s armours, skeletons, cobwebs and… mannequins hanging from nooses or seemingly knifed by Dave as an indicator of his madness. (Of course given that the entire film’s premise is all about exonerating Dave, one wonders why a sane Dave would have spent his time staging tableaus of murders and suicides for kicks.)

The ultimate pièce de résistance, however, is Dr Mangrove’s asylum straight out of bedlam.

Is it exploitative? In questionable taste? No longer acceptable for modern-day attitudes toward mental illness?

But it is also a hell of a lot of fun to watch and, pardon the pun, utterly insane.

Dr Mangrove is played by Carl Lange (also in Der Frosch mit der Maske/Fellowship of the Frog and Der Hexer/The Ringer) and the monocle he is wearing would have deserved a separate credit.

The inmates run the whole gamut of stereotypes par for films of that nature and also include a professional stripper with a compulsion to take her clothes off nonstop, much to the delight of Siegfried Schürenberg’s pervy, grand-fatherly Sir John who in his introductory scene in Scotland Yard raves against contemporary youth culture until his young female and mini-skirt wearing assistant (Ilse Pagé, soon to be a series regular in the very same role) drops in, causing him to be all charming and overly attentive again.

On top of this curious assortment of characters, the asylum also features locked rooms straight out of I’m A Celebrity, Get Me Out of Here into which rats and snakes are dropped through hidden doors in front of a terrified inmate.

Despite having the privilege of Kinski in the lead, the film is actually not dominated by him. In actual fact, he is absent for larger parts of it when the focus is on anyone of a dozen characters crucial to the story. 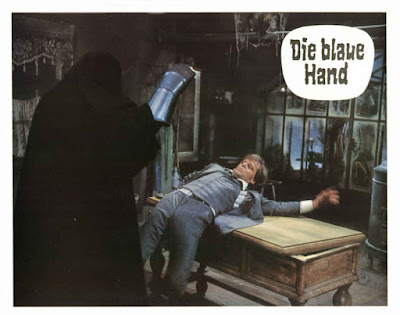 The humour is toned down significantly in comparison to earlier entries and mainly comes courtesy of Sir John. Martin Böttcher reliably as ever provides the swinging film score. And Albert Bessler’s butler breaks down the 4th wall in the final scene when he announces that the next Wallace production would be Der Mönch mit der Peitsche/The College Girl Murders.

This film was Diana Körner’s film debut. She plays Dave’s sister who during the course of the production gets incarcerated against her will by Dr Mangrove with the attempt to drive her mad. Körner over the years would become a very popular TV actress and is still active today in her mid-70s.

Also worthy of note is the pretentiously named “Le Petit Maxim”, a deserted rural nightclub that appears to have been filmed on a farm.

All in all, Creature with the Blue Hand is one of the best examples of the second half of the Rialto series. Fast moving action, combined with creepy Gothic horror and an assortment of eccentric characters result in a memorable production.

Quentin Tarantino has referenced Creature with the Blue Hand as one of his favourite movies. A strong vote in favour that is only softened by the fact that he also appears to lay an identical claim for seemingly another 10.000 other flicks as well.

There also appears to be a US version of the movie released in 1987 under the title The Bloody Dead by Sam Sherman containing newly filmed inserted gore scenes.