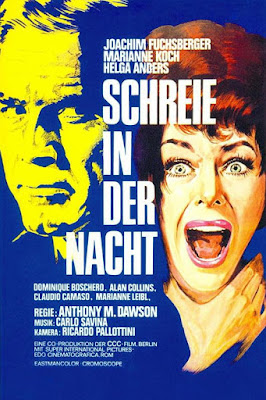 A group of travellers during a violent storm gets stranded in a creepy mansion just to interrupt a séance conducted by a haggard old mother and her weirdo son who were on the verge of contacting the ghost of someone well known to the group and threatening to reveal some secrets that would better be left buried. Chaos ensues.

That kind of story is a quintessential Gothic Horror trope and the kind of plot that director Antonio Margheriti was well known for at the beginning of his career (e.g. Castle of Blood, Long Hair of Death).

What caught my interest when I came across The Unnaturals aka Schreie in der Nacht aka Contranatura by pure chance after having never before heard of it, was the fact that this Italian production was partially financed by Atze’s Brauner’s CCC Film (who were also responsible for the 1960s Dr Mabuse movies as well as a plethora of other productions).

Those invested D-Marks ensured that the movie had a sizeable German cast including Joachim Fuchsberger (star of many a Rialto Krimi), Marianne Koch (best known internationally for A Fistful of Dollars but a popular German movie star at the time who also appeared in Coast of Skeletons/Sanders und das Schiff des Todes, an adventure film based on Edgar Wallace, and Das Ungeheuer von London City/The Monster of London City, a Bryan Edgar Wallace Krimi) and Helga Anders (Jerry Cotton: Murderclub Of Brooklyn).

Needless to say, my interest was piqued.

And needless to say as well that the film just couldn’t live up to that pique of my interest.

There is usually a good reason when classic movies have been forgotten about.

On the plus side, this production is pulling out all the stops for the scenes of the séance. Though filmed in colour the atmosphere is suitably creepy in those moments, all stuffed animals filmed at Dutch angles, spiders moving around in their web and zoom shots to the eyes that would have made a Lucio Fulci proud. Those scenes are also carried by “Alan Collins” aka Luciano “The Italian Peter Lorre” Pigozzi as the weird son and Marianne Leibl as the genuinely freaky mother. Leibl appears to have had mainly uncredited bit parts in a handful of movies but based on this performance alone I’d have loved to have seen her in much more. Of all the films I have seen with Pigozzi this is likely the one in which he had the biggest and most important role.

The problem is that those scenes at the mansion are constantly interrupted by flashbacks that are filmed flat and without any sense of mystery and intrigue. Based on the costumes and cars used the plot seems to take place in the 1920s so this could have made for some stunning mise-en-scène, alas it is all just pretty dull and uninvolving and that - unfortunately - also includes the moments where Marianne Koch’s character for no particular reason turns into a raving sexoholic lesbian which frankly sounds more interesting than it is as Koch’s mumsy kind of beauty and charm just doesn’t carry the kind of eroticism required for this type of role which was highly atypical for her.

The Unnaturals would prove to be her final movie before she studied medicine and became a popular TV Host, panelist and TV Doctor.

Ironically the Italian trailer totally ignores the main Gothic aspects of this movie and entirely focuses on the lesbian affairs and gives an absolutely erroneous feel for what the movie is about. On the other hand it does seem to hint at the reason why it was called The Unnaturals or Contranatura. The German title Schreie in der Nacht [Screams in the Night] is generic but much more appropriate.

There is a final twist reveal which feels very forced and just when you think it’s all over we get some surprise Deus-Ex-Machina style miniature work.

Remember kids, if it’s Margheriti, it’s gotta have miniature work (whether it makes sense or not). 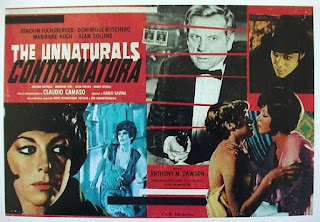 Here in Ireland (and from what I can tell also in the UK at least), the film can be streamed on Prime in a less than glamorous print but beggars can’t be choosers.

In Germany there was a DVD release but I won’t even honour it with a link as the DVD is out of print and is currently listed under some laughable prices. Let’s just say, the movie does NOT warrant spending €150, especially given that based on the reviews the print seems to be similar or identical to the washed out Prime version.