In my recent review of Der Mann mit dem Glasauge/The Man With the Glass Eye (1968) I wrote:

“The Man With the Glass Eye is one of those Wallace films that doesn’t even pretend to be based on any of his novels anymore. Its development, however, is probably way more interesting than a straight forward adaptation would have been as this is an example where a rival production from a different studio initially influenced by the success of the Rialto Wallaces in turn influenced a film in the original series back again.

Ladislas Fodor, an author who had been very influential in creating the 1960s series of Mabuse movies, had also provided a screenplay for Artur Brauner’s CCC Film production Das Phantom von Soho/The Phantom of Soho (1964), allegedly based on Bryan Edgar Wallace’s novel Murder by Proxy, a book that does not, however, seem to exist. In his screenplay Fodor focused on a string of knife murders in London’s red light district, committed by a masked killer in revenge for the actions of a gang of drug and girl smugglers.

Which kind of is the entire premise of The Man With the Glass Eye as well! (Right down to the exact nature of the reason for the revenge.)

For Rialto’s production Fodor supplied a treatment under the title “Die grausame Puppe” [The Cruel Doll]. His involvement went uncredited and his treatment was reworked by Paul Hengge whose name features in the credits of Rialto’s 28th Wallace movie.

There is speculation as to whether Phantom of Soho’s screenplay may have simply been sold over to Rialto at the time. Whatever exactly happened remains unknown but the similarities between both movies is striking (and possibly a subject for a future blog post).”

I have just rewatched Das Phantom von Soho/The Phantom of Soho (1964) so now thought it would be neat to have a little death match between those two movies to see which comes out the superior production.

Mind you, this is just a fun little exercise. Both movies are thoroughly enjoyable in their own right and get a thumbs up from me but this kind of exercise may help highlight some of the differences between the two rival series as well as how the Krimi genre ended up progressing over time.

I have come up with a number of categories under which I will have a quick look at the two movies before announcing the winner in each category. At the end of this post, I will count up those individual wins and announce the ultimate champion of this Death Match.

The Phantom of Soho was not based on any book by Bryan Edgar Wallace even though it was advertised as being based on Murder By Proxy, a novel that does, however, not even seem to exist.

The Man with the Glass Eye was not based on any book by Edgar Wallace and they didn’t even bother pretending that it was.

Both films have the same general plot courtesy of Ladislas Fodor who is credited as the screenwriter for Phantom where he also added some nice meta discussions about Krimi novels when he makes one of the characters (played by Barbara Rütting) a successful writer of crime fiction.

For Glass Eye Paul Hengge is credited as the writer though the script was written based on a treatment by Fodor.

VERDICT: The true winner here is Ladislas Fodor who (from what we can tell) appears to have been paid twice for the same script idea so thumbs up for him. In terms of those two movies, however, Phantom wins the accolades for coming up first with the general idea for the plot.

The Phantom of Soho emulates some of the black and white Rialto Krimis with its colour credits in an otherwise black and white film and a tip of the hat appearance by Bryan Edgar Wallace himself.

VERDICT: Phantom’s credits are beautiful but the one in Glass Eye are truly infectious so the honour goes to that movie.

The Phantom of Soho is very much in line with the classic look and feel of the Rialto series with its black and white scenes of nocturnal London. Franz Josef Gottlieb, the director, and Richard Angst, the cinematographer, in particular very much emulate the Alfred Vohrer Krimis when the film treats us to a number of odd angles, a look through a key hole and most impressively a scene in which we see a knife throwing performance from the perspective of the girl on the spinning wheel with the rotating camera swirling around ever faster until all is just a blur.

The Man with the Glass Eye on the other hand is anything but in line with those early entries of the series and considerably more over the top with its intense scenes of Bavaesque inspired colours and its assortment of ever crazier attacks committed by a henchman wearing a giant egg shaped head mask, burly twin killers, eccentric curiosity shops, a performer in an Old Shatterhand costume and so much more.

VERDICT: The Man with the Glass Eye had me from the first minute of its Gialloesque vibes and just never let go.

Phantom has Martin Böttcher, Glass Eye comes with Peter Thomas, both iconic Krimi composers, but Phantom also features the song “Soho” by Tanja Berg that surfaces repeatedly throughout the movie and will linger on for quite a while after viewing it.

VERDICT: Songs in Krimis are always the icing on the cake so Phantom is pitch perfect for this category.

The Phantom of Soho features a moustachioed Peter Vogel as Sergeant Hallam, an Eddi Arent copy. Unlike other Arent copies he did not go over the top with his acting and his performance is very much in line with that of the early Edgar Wallace Krimis and does indeed support the film.

At the time of filming Phantom Arent was still very much active in the Rialto series but when The Man With the Glass Eye was filmed he had already given his last “Auf Wiedersehen”.

As such Glass Eye is permeated with a lot of infantile silly humour (courtesy of Stefan Behrens as Sgt Pepper, Hubert von Meyerinck’s randy Sir Arthur and Ilse Pagé as Sir Arthur’s ditzy assistant) that sours the enjoyment of the film.

VERDICT: The Phantom of Soho wins this round for keeping the humour much more subtle and not overly distracting.

Dieter Borsche is always a welcome sight in any film he appears in. His Chief Inspector Hugh Patton in Phantom is a routine performance down to the trench coat he is wearing but lacks the kind of energy that Joachim Fuchsberger would have brought to the role.

His superior, Sir Philip, is played by Hans Söhnker who also becomes a suspect when his absence during the investigation and his regular presence in the red light district is noted. Else, he also does not leave the kind of memory that otherwise (for good or for bad) Siegfried Schürenberg or Hubert von Meyerinck had become known for.

Hand on heart, Glass Eye’s Horst Tappert is also a bit of a damp squib in comparison to other Krimi heroes but his Inspector Perkins appears to be a prototype for his long running lead in TV series Derrick.

VERDICT: Horst Tappert in Glass Eye wins this round entirely based on the influence his performance had on German TV history.

The Phantom of Soho mainly features Grand Dame Elisabeth Flickenschildt (Das Gasthaus an der Themse/The Inn on the River, Das indische Tuch/The Indian Scarf) as a seemingly wheelchair bound owner of a night club who hides her scarred face behind a veil. At her side we have the ever reliable Werner Peters who was omnipresent in 1960s Krimiland.

Though The Man With the Glass Eye is permeated with a whole range of bizarre killers and villains, none of them can be said to feature in a genuine leading role throughout the entire film. They’re all mainly characters in the organisation that for brief periods help move the plot forward.

VERDICT: Another “Thumbs Up!” for Phantom.

Barbara Rütting as a writer of Krimis observing the series of murders and Helga Sommerfeld as an endangered show girl are the two main female leads in Phantom. Apart from that we get a few short glimpses at other ladies of the night who would just about qualify as extras.

Karin Hübner in Glass Eye plays Rüttings counterpart. Instead of just one threatened showgirl we have at least half a dozen of them played by the likes of Christiane Krüger, Ewa Strömberg, Marlies Dräger, Iris Berben, Heidrun Hankammer and others. And nudity has also entered Krimiland.

VERDICT: Glass Eye wins the round by sheer numbers alone. 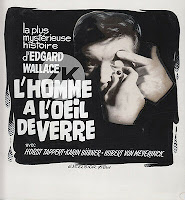 The Phantom of Soho does not just have one ending but three: the initial reveal that is genuinely surprising for first time viewers though also somewhat anticlimactic; the explanation at Scotland Yard that adds a nice little extra touch; the comic ending with Peter Vogel and Helga Sommerfeld that is totally unnecessary and has absolutely no real bearing to anything we had seen of the characters in the preceding hour and a half.

The Man With the Glass Eye on the other hand has the same kind of surprise reveal but it’s presented in a way that is fully in line with the over-the-top madness of the film as a whole while at the same time being one of the very few climaxes in a Krimi that genuinely touches you at an emotional level.

VERDICT: Glass Eye by a mile. Yes, the twist reveal as such is pretty much identical but this is a gut wrenching finale that is genuinely rare for this genre.

The numbers have now been counted. Silence in the audience please. Drum roll. We can now reveal the winner and it is….

Both The Phantom of Soho and The Man With the Glass Eye won five categories each and hand on heart, this is probably the fairest result as even by gut instinct I couldn’t clearly favour one over the other. Despite having a very similar plot, the two productions have totally different vibes and though I may give Kudos to Phantom for coming up with it all first, I also need to tip my hat off to Glass Eye for its wild colour schemes, bonkers murders and heart breaking denouement.

The two movies' trailers to wet the appetite:

Both films can currently be seen on this Krimi related YouTube channel: